Where is the Light leading Friends? Reflections on a Silver Wattle week.

To Light and Love

These words came to me during Meeting for Worship two days after we arrived at Silver Wattle, weary from an eight-hour drive but eager to take our places in the faith community, me as Resident Elder and Mark as general handyman. For Epilogue that evening I read a poem written on the day I arrived at Woodbrooke nearly twenty years ago, prompting similar recollections of ‘first days’ from Friends.

The course – Where is the Light leading Friends? Engaging with Friends in the world – led by Valerie Joy and Abel Siboniyo from Brisbane began the following afternoon once Samuel and Marceline had arrived from Melbourne. Two weeks later, rather than give a step-by-step account of the course, I offer my reflections on what was for me a very inspiring week.

We were fortunate to have David Niyonzima from Burundi and Wendy Lambourne from the Centre of Peace and Conflict Studies at the University of Sydney visit for a day. David gave a moving talk ‘How the Light is leading Friends’ which included his personal experience of genocide in October 1993 when he was teaching at the Friends pastoral training school in Kwibuka, Burundi. When troops entered the school and killed eight of his eleven students, his first reaction was to run and hide but after several days he was led by the Light to return to Kwibuka. After burying the students, David encouraged others to return from their hiding places when safe to do so. During this time he also met the young man who had brought the soldiers to the school and was led to forgive him.

After some time in a refugee camp and studies in counselling at George Fox University in Oregon, David returned to Burundi where he began the work in trauma healing that he continues to do today. The organization THARS – Trauma Healing and Reconciliation Services, treats those that are hurt first before then promoting peace to try and break the circle of violence still effecting Burundi. David encouraged us all to let the Light lead us. By listening to God’s leading we can make a difference in our own communities or across the world.

Talking with David afterwards, I was delighted to learn that Joyce, a Burundian Friend I spent time with at Woodbrooke in 1993 had survived the genocide and works in the Friends Church office in his home town.

Hearing from Valerie about the history and work of FWCC made me realise how important it is for our small and disparate Society of Friends to have a world body. World and Section conferences bring together Friends from different Quaker traditions giving opportunities for listening to and learning from one another.

I learned so much listening to the stories of tragedy of our Burundian Friends. They were stories of trauma, resilience, hope and faith, and I will be forever grateful for their sharing. How I wish those in our society with negative opinions of refugees and asylum seekers –particularly politicians and the media –would listen to the stories of those forced to leave their homelands.

Mid-week, led by Abel, we held in the Light those Friends that are suffering and enduring violence. This was followed by a meditation on suffering and violence made more pertinent by news received earlier of a Quaker pastor’s suspicious death the previous day in Burundi. An impromptu Memorial Meeting was held to give thanks for the grace of God in Pastor Moses’ life (Abel, Marceline and Samuel had all known him). We also held in the Light Moses’ wife Claudine and their three children.

For part of the afternoon silent time, I sat on a rock watching a mob of kangaroos grazing quietly, gave thanks for the peaceful environment and a life free from the destructive force of aggression. The mid-week silent time provides an opportunity to deepen experience and spiritual awareness without the responsibilities and social interactions that can sometimes get in the way.

Project sharing (giving a presentation on email conversations with a Friend from another country) took place during different sessions throughout the week. Valerie had organised names of Friends in the Philippines and India willing to connect with participants prior to the course commencement. I am in email contact with Marj Angalot, a young Friend from Bohol Worshipping Group in the Philippines. So far Marj has sent me information and photos of the World Conference and also told me about the environmental programs and drama for the young people projects her Worshipping Group (unprogrammed) is involved in. For my part I have sent Marj photographs of a QSV fundraising event, a poem, and shared a little of my faith journey. I hope this correspondence continues as much can be gained from engaging with a Friend from a different country and culture.

Sessions on Friends differing theologies and Asia West Pacific Section (AWPS) led by Valerie, Abel’s history of Quakers in Burundi, founded by American Evangelical Friends, and details of a visit (with Valerie) to Friends of various traditions in the USA, all reinforced the importance of meeting and learning from one another. 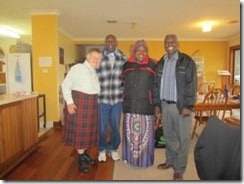 Although a small group, the course participants worked well together. We listened to one another’s stories, took part in mind mapping, in singing, role-play, project sharing and experiencing an extended silent time. Conversation over meals, washing up, serving food and around the fire in the evenings all contributed to a sense of community.

My only regret is that so few Friends came to Silver Wattle to participate in this excellent course. If the prospect of cold weather deterred you Friends, be assured wood fires in dining and lounge rooms plus central heating in the conference room and heaters in bedrooms kept us warm and cosy all week. Come and experience time at Silver Wattle Friends, its potential can only be realised with your support.