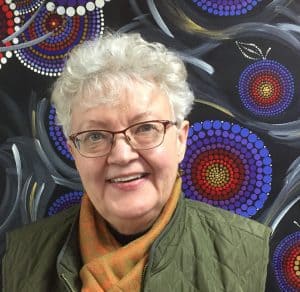 As we remember the brave moment in 2008 when our Prime Minister apologised to the Stolen Generations, we can ask ourselves two questions. How can we stand in truth and continue to pronounce that Australia is not systemically racist? Are we brave enough to stand with and bear witness to the historical and ongoing trauma suffered by Australia’s First Nations People?

I believe we are being challenged as a Congregation, as a Church and as a Country to ensure “Black Lives Matter” in all our actions, and go on a journey to de-colonise our perceptions, our prejudices, our systems and our whole Country.

We are being called as an Earth community to a deeper spirituality – to invoke the capacity of our human heart to hold tenderly the historical and current life experiences of First Nations People across the world. (https://youtu.be/GKcrL4NxNJM)

If we take this journey into the “new light” we will grow in our awareness of our conscious or unconscious complicity in white supremacy.

I am writing this reflection after hearing our Prime Minister describe “Australia Day as an important marker of Australia’s history” and “that the date should not be changed”, despite being seen as a day of mourning by many First Nations People. He explained his position with the words:

“You know, when those 12 ships turned up in Sydney, all those years ago, it wasn’t a particularly flash day for the people on those vessels either.”

This quote is a vivid example of how our whole nation has not heard and learnt from First Nations People. They have experienced and suffered abuse and neglect over generations. It is not a time now to be divisive and judgemental but it is a time for deep contemplative listening (Dadirri) and respectful conversations.

Let’s work together with First Nations People to heal the deep, raw and open wound that began for them on the 26 January 1788. Their sovereign country was invaded with the raising of the British flag in Botany Bay. The process of colonisation has been brutal. The trauma they have suffered has been unbearable for them and it is difficult for us to hear and respond to their stories. I pray we can all listen with mercy and compassion and own our history.

We took a more enlightened step in 1969, when all states across Australia repealed legislation allowing for the removal of First Nations children under the policy of ‘protection’. In the following

years, Aboriginal and Islander Child Care Agencies were set up to contest removal applications and provide alternatives to the removal of First Nations children from their families. I was privileged to work for five years in the South Australian agency and part of my role was approving the court reports for the Youth Court. I look back now (with humility) as I realise I should not have been in the position to sign off on these documents as a non-indigenous person. I am part of white privilege and as such can never stand in place for an Aboriginal person. Insight is gradual and we can all learn how to move forward more respectfully.

We took a united step forward owning up to our history when we apologised to the Stolen Generations. However, in the 13 years since the apology the numbers of First Nations children being placed in out of home care is increasing each year. In February 2020, there were 17,979 First Nations children living in out of home care and they are now 10.6 times more likely to be removed from their families than non-Indigenous children. If urgent action is not taken, that rate is projected to double in the next 10 years.[1]

It is time for all of us to stop another generation of “Stolen Children” being removed. We can learn from our mistakes. With urgency, effort and intent we can address the underlying causes and factors for abuse and neglect of children, and most significantly, the intergenerational trauma suffered by First Nations People.[2]

We can have trauma-informed and healing services that acknowledge the grief and trauma caused by invasion, brutality and colonisation. We can acknowledge and address the systemic racism, oppression, marginalisation and deprivation that First Nations People face every day.

I began working in the field of the care and protection of children when I was 16 years old. For 47 years now I have been aware of many children who are hurting, and many parents and grandparents who have been hurt over generations. I have seen the subsequent suffering and dysfunction in many communities.

In statutory child protection work I witnessed the situation many First Nations families and communities face every day. Whilst investigating notifications of neglect and abuse I was often appalled by the desperate living conditions of families who showed inspirational resilience. They lived in circumstances of extreme poverty, overcrowded and substandard housing and homelessness, family and community violence, high rates of incarceration, deaths in custody and the constant threat and removal of children from kin and country. I often pondered how I (if I was a parent) would manage if I was given the same set of circumstances? I realised that if the roles were reversed I would not cope as well as they did. Their efforts were often heroic. Trauma impacts any person’s coping mechanisms.

“It doesn’t matter who you are, trauma affects the way people think and act and overwhelms their ability to cope and engage. Common symptoms include fear and anxiety, poor relationships, substance abuse and violence.”

During the 15 years I worked in child protection for the state government I witnessed: a mother working tirelessly to keep her house clean with raw sewerage flowing through her home; homes with dirt floors and no air conditioning; the shame of parents who could not provide fresh and healthy food for their children; the horror and betrayal when we substantiated that seventeen children had been sexually abused by a “trusted and white” community administrator; the community anguish when “a guardianship” teenager (who was removed as a baby) returned home and suicided within two weeks; the terrible separation anxiety of children who wanted desperately to return to their kin and country and the anguish of grandparents who received tearful and confused phone calls from their grandchildren “in care”, thousands of kilometres from home.

I often pondered what would happen if I “substantiated” abuse or neglect, by naming a government department or a “failing system” as the “perpetrator.” I too have perpetrated the process of colonisation and am part of “failing systems.” While leading a team of child protection and juvenile justice workers in Ceduna in South Australia, a dear friend and an Aboriginal Elder reminded me that I needed to listen to the Aboriginal Community before I made decisions affecting their lives.

He respectfully told me that I had, “no ears” – Pina Wiya – and was not listening to the community. He told me that I tended to make decisions for families and the community in their “best interest.” I learnt an important lesson and took more time to listen with “open ears” in my privileged position as a public servant. There were many times in the succeeding years when I remembered this conversation and asked families what their dreams were for their children and how we (the state department) could support them to achieve what they wanted. I have never met a family who didn’t want better outcomes for their children.

I also saw the “wonderous” changes that happened when “we listened” and provided respectful and strength-based family support, healing services and adequate resources to enable families to care for their own children.

Let’s listen to the cry from the heart and respond to the pain, anguish and desperation of Australia’s First Nations People. I am inspired by Amanda Gordon’s poem to continue to take a path previously not chosen by those of us who have been privileged:

“…one thing is certain: if we merge mercy with might, and might with right, then love becomes our legacy and change our children’s birthright. So let us leave behind a country better than one we were left. With every breath from a bronze, pounded chest, we will raise this wounded world into a wonderous one.”

Kenise Neill is a Sister of Saint Joseph (and attender at the Eastern Suburbs Worship Group in Adelaide) who has had a life-long passion to make a positive difference in the lives of children.

Since completing a degree in Theology and another in Social Work, Kenise has worked in many roles in statutory child protection. For ten years she was responsible for child protection, youth justice, kinship care and the leadership and supervision of staff in the Ceduna and Coober Pedy areas. These positions involved travelling and working in Aboriginal Communities on the West Coast and the far North of South Australia. From there she moved on to a position as Senior Manager for Therapeutic Services for Aboriginal Family Support Services (AFSS), where she was responsible for staff training, cultural responses and recommendations for the Youth Court for Aboriginal Youth Court Orders, and for therapeutic program development and service delivery.

[2] Media release – 26 January: To truly close the gap, we must recognise the trauma our children and families have experienced. 25 January 2021.