The Conference on “Xenophobia, Racism and Populist Nationalism in the context of Global Migration”

The conference was organised by the World Council of Churches, Geneva (WCC) and the Vatican City Department for Promoting Integral Human Development and the Department for Promoting Christian Unity, and was Held in Rome, 18 – 20 September 2018.  Wies  took part as Vice-President of the NSW Ecumenical Council, and as a member of the Religious Society of Friends, Quakers.

From this wide variety of perspectives, common ground was found immediately and our different denominations, regional areas, spoken language and organisational positions fell away. The emphasis was on human rights which were expressed by representatives from Christian churches, other faith traditions and speakers from secular organisations.

“…. the common basis for our reflections is the conviction that all human beings are equal in dignity and rights and equally to be respected and protected, and as a consequence we are called by God to resist evil, to act justly, and pursue peace to transform the world.”

“Recent drivers of forced displacement and migration have included unresolved brutal conflicts and the lingering consequences of global economic crisis and austerity policies, as well as other root causes such as extreme poverty, food insecurity, lack of opportunity, and insecurity. The advancing impacts of climate change will likely add significantly to the drivers of displacement.”

In Australia we distinguish between migrants and refugees. At the conference this distinction seemed not significant as people spoke from their experience e.g. two million refugees/ migrants from other African countries in Libya hoping to cross the Mediterranean, Filipino workers in many countries, Venezuelans fleeing their bankrupt country.

“Xenophobia, which primarily means ‘fear of the foreigner’, is expressed by an attitude that excludes and confines the other in their predicament and by forms and structures of indifference and rejection, … It is therefore necessary to address the fear of the other and to challenge the exclusion and marginalization of migrants and refugees. This fear can reveal a complex personal or collective relationship with the past, the present or the future, and expresses the anxiety of losing one’s identity, security, possessions and power in confronting the challenges of life and the future.”

“We recognize that the concerns of many individuals and communities who feel threatened by migrants – whether for security, economic or cultural identity reasons – have to be acknowledged and examined. We wish to be in genuine dialogue with all those who hold such concerns. But based upon the principles of our Christian faith and the example of Jesus Christ, we seek to raise a narrative of love and of hope, against the populist narrative of hate and of fear.”

“Good cooperation between faith communities, civil society actors, academics, economic and political actors is essential in the fight against xenophobia and racism.”

The full statement from the conference can be found here.

The attendees were invited by the WCC or the Vatican and were a self-selected group of Christians who have a concern for the plight of people who leave their home country or region because of civil war, entrenched poverty and inability to make a living locally, or endemic corruption, and who have chosen not to participate in local warfare or corruption to survive. Most of these people do not have the luxury of being assessed by the UNHCR as a refugee, and if they did would wait for many years in refugee camps that have their own levels of violence and deprivations. If they are “economic migrants”, then that is to send money home to lift their family out of poverty.

There was not an attendance list to get an overview of the attendees. My estimate was that about 60% were from Europe, 20% North America, 10% Asia and the other 10% from South America, Middle East, one person from New Zealand and I was the only Australian. Perhaps 60% of attendees were catholic and 40% protestant with the majority Lutheran. About 60% of presentations were in English. The organisations that the attendees came from were not always informative e.g. University of Miami: a Law professor, specialising in migration law, devout catholic, originally from Albania.

The conference had simultaneous translation into English, Italian, French and Spanish. When a non-English presenter started, all the English speakers put their headphones on and tuned into the English translation channel. The same for the other languages. The translators could not always keep up as it seemed that the non-English speakers said a lot more words than were translated.

The presentations on xenophobia, the “fear of the foreigner” were good and outlined fear by the people in the receiving country of losing control of their identity and economic opportunities and fears of crime waves, fuelled by hate speech and false news by media, online forums and politicians perpetuating stereotypes e.g. these are not “real” refugees or people in need. Factual counter-narratives may not have much impact on fear and it might be better to focus on building relationships at a local level, narratives of hope and the local people realising their blessings. The churches are not always helpful in communicating values and integration; it might be more effective to work with local government.

The African representatives spoke about the aftermath of colonisation causing many millions of Africans to move to other parts of their country or to other African countries to seek safety and a basic living for themselves and their family. It was mentioned that there is a lot of local racism and discrimination between different tribes and nationalities. A black, female pastor from southern USA and active in the Black Lives Matter movement gave a fiery talk about racism and discrimination. The representative from the Council of Churches in the Middle East spoke about the millions of displaced people from the ongoing war who are languishing in refugee camps or living in sub-standard conditions somewhere in the Middle East, waiting to go home.

I spoke with several priests from Asia about the global military industrial complex needing wars to continue and the resulting flow of refugees. These priests were much in agreement, and then I realised that they all belonged to Pax Christi. The general secretary of the WCC is also very aware of the duplicity of many Western countries whose economies rely on the manufacturing and trade of weapons, also in his own country Norway. There was little opportunity to speak about climate change, necessitating peoples to move. As the attendees were well informed, I think that they were across this.

The second reading of the conference statement received a standing ovation and was accepted. 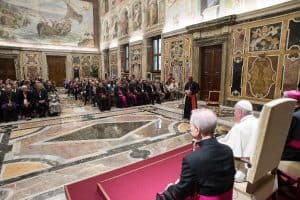 Not your usual Meeting House. Cardinal Turkson presents an overview of the conference findings before Pope Francis in the Vatican

On the last morning, all 200 of us went by bus to the Vatican for an audience with Pope Francis. Getting to the audience room was a bit like a scene from the Da Vinci Code, the only thing missing was the spooky music. It was a rainy, grey day, we walked through large cobble stoned courtyards with high walls of buildings with curtained windows, under large stone archways, around corners, along walkways with Swiss guards standing in front of some large doors or in archways. Then we arrived at wide, long, white marble staircases with polished brass handrails and after a few more turns arrived in an ornately painted room where our chairs were set out in rows. We were told not to take selfies with the Pope. When Pope Francis arrived, everybody jumped to their feet and applauded loudly and took photos on their mobiles above their heads, not the silence of a spiritual gathering that Quakers would have maintained. The cardinal who was assigned to the conference gave a short report in Italian, the general secretary of the WCC gave a short report and then Pope Francis responded in Italian. He then said that he would not give us a speech but meet us individually. We filed to shake hands with him, about 10 seconds each. The Pope, in his eighties did not seem to tire and interacted encouragingly with each person. The Vatican issued its own statement about the conference the next day, confirming the conference outcome. On our walk back to our buses, one of the African representatives showed us the Ethiopian chapel that is used by Ethiopian Catholics visiting the Vatican. There are many such chapels on the grounds of the Vatican. Then I saw some of the 2000 solar panels on roofs of Vatican buildings and got my photo.

The conference was held at a large hotel with extensive conference facilities about 20 minutes’ drive from the Vatican. Conference attendance, meals and the stay at the hotel were paid for by the organisers. Wies travelled at her own expense to Rome.