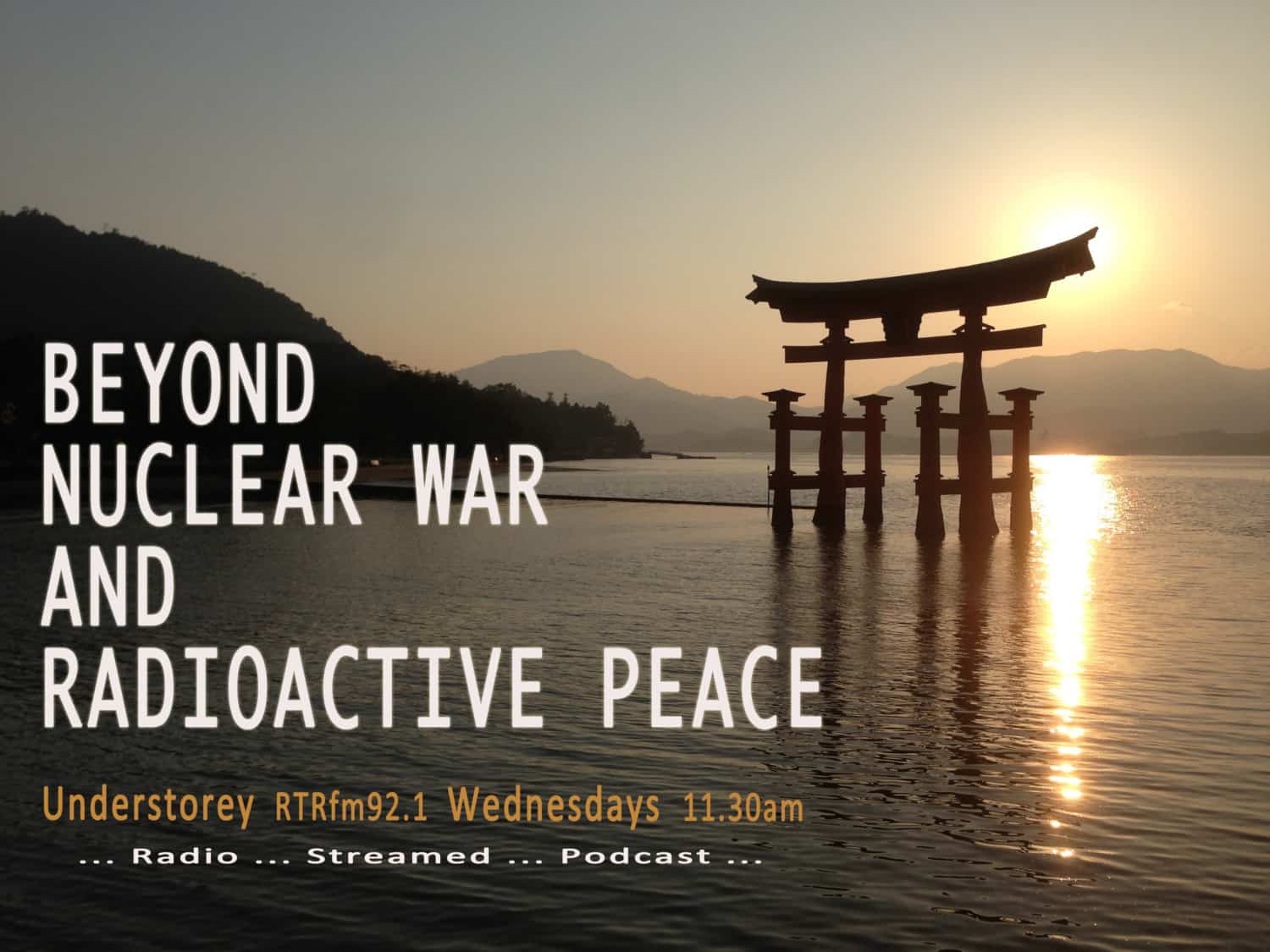 Dawn, Fukushima City.  Alarms break into our sleep.  Rescue services ring out below, along city streets, rattling urgency.  Is something serious happening?  We are foreigners, not knowing rules.  No one knocks on our hotel door ordering us to evacuate.  Still, sirens echo off buildings, a doppler sound from the future, too insistent for us to shrug off completely. Are we about to witness the latest of the still unfolding disaster of Fukushima Dai-ichi? Is this what it felt like on 11 March 2011?

We can’t tell.  In Japan, catastrophe and polite stoicism go together.  Think Hiroshige’s “Great Wave off Kanagawa”: crews on three boats, hanging on tenaciously, a giant wave almost upon them, and storm clouds. Japanese true safety is in the distance: paradoxical Mount Fuji, symbol of national identity, active strato-volcano. Hiroshige’s woodblock print is an emblem of stoic endurance: ennobling.  Volcanoes, mudslides, tsunamis: the Japanese are organised for all of them.  Well, almost all.  They aren’t prepared for nuclear disaster.

Initially every Japanese cell phone beeped, warning of an imminent earthquake.  Then came the worst quake in living experience.  Then some realised that the nearby nuclear reactor was at risk, and for the first time opened a map to see exactly how far away they were from the Daiichi plant.  But it was so difficult to get news.  People had to go to international web sites for news; even then, some computers showed “Error 404” when they tried their browser.  Even today, most Japanese people are unaware that the then Prime Minister, Naoto Kan, was considering the evacuation of 35 million people from Greater Tokyo. The PM discovered the crippled power plant seemed beyond control, not just technically, but managerially too, and personally intervened.  The whole world was unaware that with failed backup systems, the Daiichi control room had to be powered by car batteries taken from on-duty workers’ cars, just so they could know whether crucial valves were open or closed… astonishingly, there were no evacuation plans, and people weren’t told, or were moved into the path of the radioactive plume…

From the first broken pipe, the nuclear disaster was “man-made.”  This was the finding of the Fukushima Nuclear Accident Independent Investigation Commission, appointed by the National Diet.  The hydrogen explosions, partial nuclear meltdowns, and contamination of land, air and sea by Australian nuclear materials and evacuation of 150,000 residents was not caused by the earthquake or the tsunami, but bad decisions, a wrong mentality, a lack of managerial command structure, and what TEPCO admitted as their overconfidence.  Investigation Commission Chair and one-time Science Advisor to the Cabinet of Japan, Kiyoshi Kurokawa, explained that from the 1970s onwards  “nuclear power became an unstoppable force, immune to scrutiny by civil society.”

Officialdom was typically slow and evasive about the Level 7 nuclear disaster.  Should locals evacuate their children?  The government refused to distribute stable iodine.  Only two days after the nuclear accident, the World Health Organization assured everyone that there was no public health risk – the end result of the 1959 agreement 12-40 with the International Atomic Energy Agency (IAEA), which means that WHO gives the world’s promoter of nuclear energy, the IAEA, final rights of what goes out to the public. The IAEA’s message fitted in with the Japanese government’s soothing reassurances. A doctor was brought in from Nagasaki to say a little radiation was healthy: children could safely play in the snow.

Downstairs, our hotel lobby has official microsievert readings, but we don’t rely on their accuracy.  At nearby Koriyama City we witnessed how official Geiger readings were underrepresenting true radiation levels, or in one case we saw – just round the corner from the national broadcaster building – falsifying the very existence of a radiation monitor, providing safe readings for a popular children’s playground.

So it is not impossible that if the Daiichi nuclear power plant, fifty kilometres away, has now exploded, belching becquerels, the people of Fukushima City might be amongst the last to know.

Radioactive cloud-producing hydrogen explosions and meltdowns can be concealed for only so long.  For the first full month the government told farmer Kenichi Hasegawa, along with his colleagues and families, that they were safe living and farming 30 km away from Daiichi.  But then they were told that they must immediately evacuate their farms; that they could properly return in maybe 30 to 50 years.

The government assured residents just outside the strict exclusion zone that Fukushima City and hinterland was safe and on the road to recovery.  Social cohesion factors preyed strongly on people’s minds: aged parents refused to leave, work was too hard to find elsewhere, and leaving would speak of loss of confidence in government or community. Yet underneath Fukushima’s everyday normality is uneasiness.

Would you eat food from Fukushima?  It was difficult to import food from elsewhere, and it was difficult to export produce.  We saw children of Fukushima playing sport and riding bikes in the rain, absorbing microsieverts of radiation, increasing the likelihood of (at least) thyroid cancers. For a time, to keep schools open, the government even lifted the threshold level for radiation by a factor of twenty, so that children now could receive the same doses as an employee in a nuclear power plant (that’s 20 mSV/yr).  Fukushima rice is being reintroduced into school lunches.  Contractors at nuclear power stations have had their threshold lifted to a 100mSv/yr.

Evacuated farmers, listless from their temporary living in emergency shacks and city flats, visit their land when possible.  They wonder whether they should ask the government to be more lenient about the minimum radiation exposure, else they will never live to farm again – and governments are happy to foster the direction of this thinking.  The beauty and fecundity of Fukushima surprised us, because it was in the midst of invisible danger: radiation circulating and dividing, driving families apart, putting communities into two minds. Elizabeth had seen a similar dance away from truth, working as a journalist in the early 1980s in Northern Ireland. In Fukushima, it was misinformation and misdirection for a huge population, fracturing lives and communities.

The problem is so big: fertile land wide, fisheries deep, millions of people high, it seems that the government has decided to solve a much smaller problem instead.  The government is managing perceptions, making signs about recovery, trying to lead people away from the idea that a widespread and deep-time contamination has happened at all.  Like war-weary civilians, the population wants to move on, and the government is only too willing to point a way.

Even as we write, two and a half years later after the disaster began, 1331 highly radioactive used fuel assemblies perch above ground in one of the wrecked reactor buildings, with enough radioactive caesium (ten times that in Chernobyl’s 1986 nuclear accident) to start a chain reaction, given the smallest mistake.  If something goes wrong, some global experts warn that an evacuation of Tokyo might become necessary. This is what the international safeguards look like.  That’s what local social and economic benefits to Australia look like.

All thanks to Australian uranium, sold to Japan, and used at Fukushima.  That’s partly what brought us to make this community radio series. Adrian travelled to Yeerlirrie, near Wiluna, with a media mob for the Walkatjurra Walkabout, highlighting the intention of Toro to build WA’s first uranium mine.  A Japanese protestor there, mindful of Hiroshima and Fukushima, told Adrian that mining uranium was “the beginning of the nightmare.”  Then we read, from a parliamentary committee hearing, largely unreported, that Fukushima was irradiated with Australian uranium.

It all came together then – Elizabeth’s mother, and her siblings, had grown up during the 1920s and ’30s at Yeerlirrie, on a station holding. Her mother died the week after the Great Tohru Earthquake of 2011, beginning the nuclear accident that still continues today. The horrors of the tsunami and explosions coincided with her extended family sitting by her bedside as Anne slowly quietly faded away.

So we travelled to Japan witnessing as community radio journalists as well as for personal reasons. Over five weeks, across parts of Honshu and Hokkaido, we interviewed people who had experienced earthquake and tsunami, then nuclear disaster.  We made appointments to meet and speak with many NGOs and individuals, and even the Tokyo Electric Company (TEPCO) itself, about their experience of the earthquake, the nuclear power plant disaster. We were on a path of discovery and connection, making friends and asking hard questions in caring ways, offering our forthcoming community radio series as witness.

Geiger counting on the future

We encountered what has been called “the nuclear village”: the interlocking relationships and revolving door for employees of government, nuclear regulator, press corps, and nuclear powered electric company that made and makes accountability difficult, swift action unlikely, and truth telling an exercise of patience on the part of the listener.  When we met with TEPCO, we were assured that the company now took “the transmission of information, our transparency, public opinion and the community’s response to events very seriously.”  This was the day of TEPCO finally admitting that since the 2011 accident, after denying it for more than two years, radioactive water had indeed continued to leak into the groundwater, contaminating drinking water and entering the Pacific Ocean.

That morning in July 2013 at Fukushima, we might have woken to the sounds of an everyday fire rescue.  But because Australian uranium had been brought to town, carried not just by sea freighters but by false and unreliable promises of the Australian and Japanese governments, and our uranium was put in less than perfect hands, the sirens now could also be the alarm to warn of more radioactive materials escaping into sea, land or air.  Or those spent fuel rods, crashing down to the ground, creating a chain reaction that will change the world.

Our trip was part-funded by a grant from the AYM Peace and Social Justice Fund.  We hope that you will be able to hear for yourself some of the stories we came upon in Japan in our radio series “Beyond Nuclear War and Radioactive Peace,” broadcast on RTRFM 92.1 in Perth, and available as podcasts from the RTRFM webpage.  You can also “like” our “Yarnwaves” page on facebook, with news of our blog, to keep informed or find out more about this and other environmental issues we report on as volunteer peace journalists.  Next AF: Hiroshima and Nagasaki.