Reflections on being Presiding Clerk of Australia Yearly Meeting 2016-2019 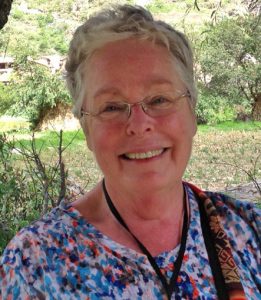 It is a privilege to be nominated for the role of Presiding Clerk of Australia Yearly Meeting, a position of great trust and responsibility. Although I was uncertain of my ability to fulfil the role, I knew from past experience that I was surrounded by loving, supportive Friends and that this was a job that was not done alone.

The role pushed me into places and situations well outside my comfort zone. Within a few weeks I was asked by Fairfax media for an interview on Quaker attitudes to same sex marriage. I had to put aside my nerves, given this opportunity to convey to a wide audience the message that Friends strongly support marriage equality and had done so for many years.

One of the most pressing things to deal with as Presiding Clerk is the number of emails, many requiring attention and action. This is only a fraction of the number of emails that the YM Secretary has to deal with. I felt it was important to receive and to read minutes and newsletters from all regional meetings and from all Yearly Meeting committees. After all, that’s where the real work is done. Email communication was also a very convenient and efficient way to seek advice and guidance when I needed it.

There were times when I received requests from individual Friends urging me to respond publicly to a particular issue. The YM Clerk certainly does make public statements. However, these are made on the recommendation of a Regional Meeting or YM Committee. It was my job to remind Friends that it is our practice to initially take a concern to the local meeting, regional meeting or YM Committee for discernment. We begin at the grass roots level.

The Presiding Clerk is ex-officio on the Board meeting of The Friends School and its subcommittee, the Quaker Values Committee. The YM Clerk is also ex-officio on the Linkages Committee of QSA. By chance I had been on both of these committees before taking on the role of Presiding Clerk, and I enjoyed very much the opportunity to develop stronger connections with both The Friends School and QSA.

An important responsibility of the Presiding Clerk is representing Australian Friends nationally. This is particularly important at meetings of the National Council of Churches where there is an opportunity to network with churches with whom we share concerns. These meetings also offer ways to spread awareness of the ways that Quakers operate without clergy and without hierarchy. Over the past three years I have met many impressive people doing important work within their own communities.

One of the highlights of the role was writing minutes at Yearly Meeting. I thought this would be the hardest and most demanding of tasks, but instead I found it most rewarding.  At the beginning of a business meeting there is often uncertainty about how matters will proceed. When Friends speak openly, listen attentively and the meeting is truly gathered, the fog suddenly clears and a way forward emerges. When the minute accurately reflects the thoughts and feelings of the meeting I experience a sense of elation as well as relief. When the meeting is less gathered, when many hands shoot up and unrelated issues are raised, minute writing is more like untangling fishing line. Also rewarding, but requiring patience and time.

Former Presiding Clerks advised me to “trust the process” and I have found this advice very helpful. Our Handbook, which is meticulously updated and revised each year, provides valuable guidance on Quaker process based on tried and tested experience. Quaker process leads us to sound decisions and, just as importantly, builds an inclusive, compassionate community. I am now an enthusiastic supporter of Quaker process who has great respect for the Handbook.

Sometimes unforeseen events demand that the role is set aside for a time. My husband Joseph became seriously ill just before YM18 and died seven weeks later. At very short notice, emergency arrangements were made and all duties were picked up and carried forward by a dedicated team of Friends. I knew when the time was right to resume the role once more, and Friends trusted that decision. My support group has provided a wonderful network of support over the past three years. So, even though the role of Presiding Clerk is an important one, the Society of Friends manages perfectly well without one during times of crisis.

What sustained me during my term as YM Clerk, and which sustains me still, is the knowledge that I can draw on the experience, expertise, wisdom and support of Friends in addition to guidance from the Spirit. I am most grateful to have been entrusted with the position of Clerk for Australia Yearly Meeting from 2016-2019. It has been an unforgettable and most rewarding experience.