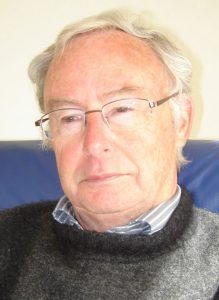 Let’s start with my history.  I came from a nominally Anglican family.  We didn’t go to church often, partly because we lived on a farm some distance from town. Services at our local village church were only once a month.  Nevertheless, if they were asked, which they weren’t, and if they had thought about it, which I don’t think they often did, I’m sure my parents would have professed orthodox Anglican beliefs.

When I came to Sydney to go to university, I thought that as an Anglican I should join the local Anglican Church.  Being theologically naïve, I didn’t realise this meant joining a nest of evangelicals.  Members of the church youth group were expected to “witness” regularly. This usually took the form of describing your Road-to-Damascus conversion experience.  In your day-to-day life you were supposed to attempt to convert anyone you had contact with.  When this annoyed them and they abused you, this was “being persecuted for Christ”, and was a wonderful thing.

I was finally saved by being introduced to the Student Christian Movement.  Here I learnt that there were other flavours of Christianity, and was introduced to theologians such as Bonhoeffer, Bultmann and Tillich, some of whom I read, and some of whose ideas I absorbed by osmosis.  I was therefore well primed for John Robinson’s Honest to God[1] in 1963, just after I left university.

On these bases I worked for some years to define an acceptable God, mainly by defining the things God wasn’t.  The traditional “Old Man in the Sky” was easily dispensed with. But, as a scientist, I wasn’t comfortable with an interventionist God who interfered with the physical world.  What would be the point of carrying out an experiment if the result could possibly be influenced by divine intervention? I was delighted to hear Jocelyn Bell Burnell express similar conclusions in her 2013 Backhouse Lecture[2].

The question of God acting in history is similar.  There is no doubt that people in history have acted in a certain way because of their belief in God, but that doesn’t show that God has directly influenced history, either by physical intervention, or by actively inspiring, guiding or controlling those involved.

Rudolph Bultmann[3], starting from the premise “The whole conception of the world which is presupposed in the preaching of Jesus as in the New Testament generally is mythological”, then had to answer, How does God act in the world?  His conclusion: “The action of God is hidden from every eye except the eye of faith.” In other words, we could say: things happen, and it’s up to us to decide whether we want to see them as God’s action.

Now, I’m a simple chap, not greatly given to philosophical abstractions or to the supernatural.  It was with some relief that I applied Occam’s razor (“entities must not be multiplied beyond necessity”) and concluded, as Laplace supposedly said to Napoleon[4] “Sire, I have no need of that hypothesis.”  The world worked quite well for me without God.

So now I agree with David Boulton[5]: “If God is no more (but, gloriously, no less) than a projection of our highest and deepest values, and if these must be human values (because no other form of life has created and articulated them), God-centredness just becomes one way, a religious way, of talking about being human.”

As you can see, I’ve reached this point rationally and as far as possible without emotion, but I sometimes wonder if I’m missing something.  Can it be true, as someone has suggested, that “I feel, therefore I am”? I am regularly inspired by some of my theist “spiritual” friends and Friends.  I hope people who think my way are welcome in Quakers, but I’m sure Quakers would be poorer if all members thought like this.

As Richard Holloway says: “I don’t any longer believe in religion, but I want it around: weakened, bruised and bemused, less sure of itself and purged of everything except the miracle of pity.  I know that the people who will keep it going will have to believe in it more than I do. …. Anyway, I no longer want to persuade anyone to believe anything – except that cruelty, especially theological cruelty, has to be opposed, if necessary to the death.”[6]

And what of our language?  I’m happy to use “God” as a shorthand term as defined by David Boulton above, but what does “the Spirit” mean in a non-theist context?  Is it just esprit de corps, or perhaps like the “school spirit” we were always told we needed?  I don’t think so; “school spirit” was an exhortation to think the same as everyone else, certainly not in the tradition of George Fox.   But does “spiritual” mean any more than “emotional”? Or perhaps “poetic”? And what does “religion” mean in terms like Boulton’s[7] “religious humanist” or Don Cupitt’s[8] “religious imperative”?  Certainly not the same as in Bonhoeffer’s[9] “religionless Christianity”.

The best word I can suggest is that the spirit, the Inner Light, is the conscience – but the conscience sensitised by an empathetic and compassionate (post-Christian?) environment.  And I have felt what I can only describe as the spiritual in the music of Beethoven and Mozart, for example, and in some art works and great buildings like Salisbury Cathedral.  I can also, along with many people, feel a sense of the spiritual in natural scenery and sunsets.  It all seems to be tied in with aesthetics, but it’s beyond me to go further.

And speaking of George Fox, what is my relationship with him, Margaret Fell, and the other early Quakers?  I applaud the early Quakers for their wisdom, their fortitude in the face of persecution, and perhaps largely for their common sense.  But my view of God and of the world is very different to theirs because of the very different intellectual environment we live in. Fox’s most enduring statement was “What canst thou say?”, encouraging us to adjust our beliefs to our times and conditions.

Similarly, because of my sense of history, when I attend an Anglican service, I prefer a High Church service, the King James Bible and the 1662 order of service.  I appreciate the poetry and theatricality, and the fact that I am saying the same words that have been said by congregations back to 1662, back further to the ill-fated Archbishop Cranmer, and in another language, back perhaps a thousand years more.  But my beliefs are certainly are very different from 16th and 17th Century Christians, and to most modern Anglicans in the pews, to the extent that I find many of the statements in the liturgy ridiculous – but often at the same time poetically beautiful.

And if we are to appreciate the beauty that the Christian church has inspired, we need to understand the deep beliefs of the artists, the cathedral builders and composers from the Middle Ages, the Renaissance and forward.

What is man (and woman) that thou art mindful of him (or her)?

Quaker (and other) environmentalists tell us that humans are part of nature.  True, we are products of the same processes that have formed our environment since the formation of the Earth.  We share evolution with all living things – a quick Google search suggests we share about 95 percent of our genes with a chimpanzee, 80 percent with a cow, 75 percent with a mouse, 60 percent with a fruitfly, and 50 percent with a banana.

But somewhere in the later stages of evolution something world-changing happened. The human central nervous system developed a capacity for abstract thought, imagination, and the ability to conceive of concepts such as right and wrong – we had eaten of the fruit of the tree of the knowledge of good and evil.  That sets us apart from the rest of the environment.

This mental ability, combined with the advances in agricultural production that allowed the development of a leisure class, led to the gradual development of ethical codes. It also led to a curiosity about how the world worked, which in turn, in the absence of scientific information, led to the postulation of a range of supernatural beings.

The modern non-theist has rejected the supernatural and is left with physical, historical humanity.  This means doing without the ever-benevolent and omnipotent God. It would be good as a humanist to believe in the goodness of people (that of God in all people), but at times this almost takes more faith than I can muster.  We are left with having to deal as best we can with a rather messy and greatly flawed humanity.

So, if it’s any comfort to the theists, there are times when I would like to be able to fly to the bosom of the Lord and take comfort in the ever-lasting arms, but I can’t do it any more.

As Richard Holloway says: “. . . it is still possible at Christmas for the godless to sing with sincerity the carols and celebrate the coming of God in human form.  For them, God has indeed come down from heaven – which heaven itself is now empty.  Knowing that can pierce even the confidently godless with occasional regret . . . The godless may no longer believe in God, but they can go on missing him when he leaves.[10]”

So, I can just seek comfort and wisdom from my fellow imperfect humans.  And Quakers are some of the best of them.

[4]Although Stephen Jay Gould in his Dinosaur in a Haystack (1996) points out that it is unlikely that Laplace ever said this to Napoleon.