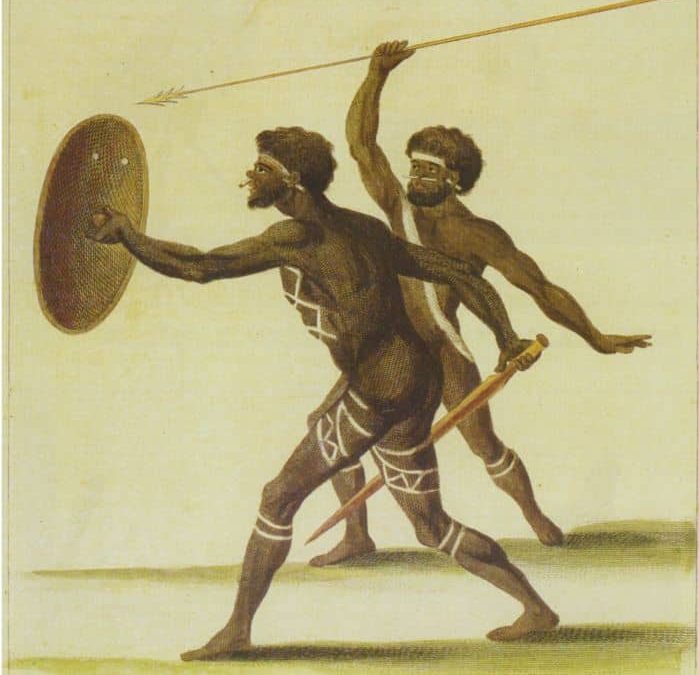 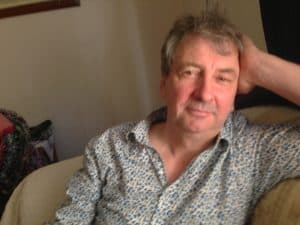 Many Friends know that our first peace testimony was declared to Charles II and Parliament in 1660.    But how has peace prospered in Australia since that first day in 1770, when Scottish Quaker Sydney Parkinson, aboard the barque Endeavour, directly observed and later artistically depicted, two Aboriginal people opposing Captain Cook’s attempt to land?

Parkinson died at sea early the next year, on 26 January, but amongst the botanical artist’s many works published in England was an engraving of this Botany Bay encounter, entitled “Two Natives of NEW HOLLAND advancing to Combat.” Two Gweagal men weigh up with serious intent, equipped to battle.  Yet might it not be equally a ritual warning? In any case, Cook took no chances, and when warning shots failed, ordered rifles to be aimed directly at the men on shore.  One of the two was wounded, and his wooden shield dropped.

Friends’ presence on this continent, however well-intentioned, must always deal with Parkinson’s first contesting image – Aboriginal people prepared to defend their land from outsiders.  Members of the Religious Society of Friends may have come to the Antipodes with love in their hearts, but they have also been beneficiaries of an aggressive dispossession occurring often just years or a few miles ahead of them.

So how has the peace testimony fared in Australia?  In Charles Stevenson’s “brief history of Quakers in Australia,” With Unhurried Pace (1973), we witness the earnest attempts by travelling ministers James 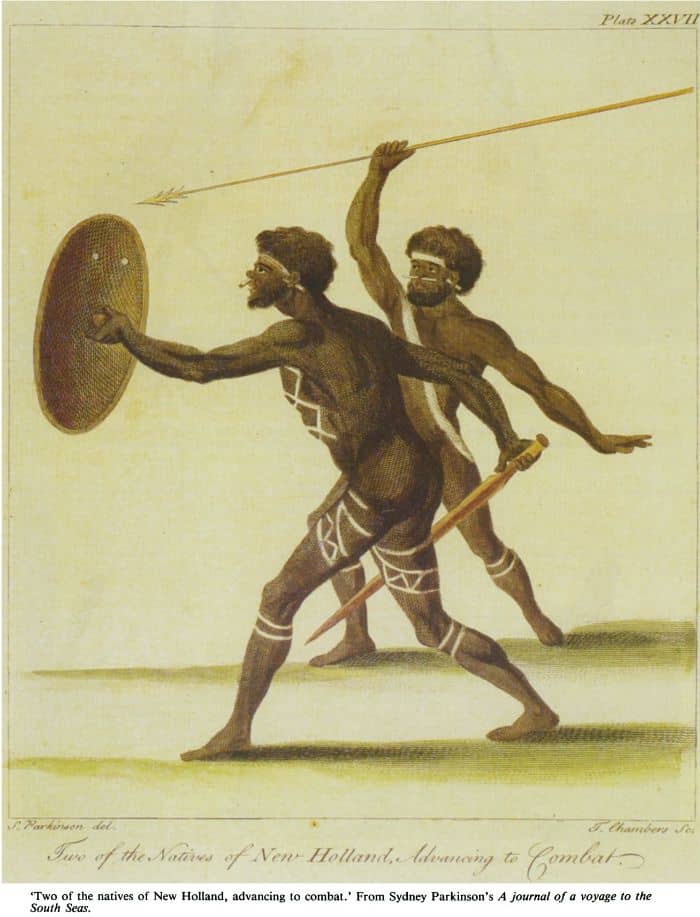 Backhouse and George Washington Walker in the 1830s to establish Meetings in various parts of the British archipelago whilst they also challenge the treatment of Aboriginal people, sought humane conditions for convicts, counselled temperance, and called the wider population to align with Quaker testimonies.  Later visits by Friends added to reports back to London.  But the chief efforts throughout the 19th century amongst those who had made Australia their lasting home were centred, understandably, towards establishing fellowship amongst less than five hundred Friends, scattered across the land.

If we look, we might see the end to decades of 19th century dormancy, and a rising in concern amongst Friends about directly declaring the value of peace and its place in Australian society.  By the beginning of the twentieth century, there was active opposition to military cadets in schools, then campaigns against the First World War and conscription, support for women’s rights and international forums for peace like the League of Nations and later the United Nations, concern about war and fascism, practical efforts to build relationships between peoples across the world, assistance supportive of better relationships with Aboriginal people, and polite but firm defiance of Australia’s involvement in “wars of choice”. As the century progressed, Friends’ communities shared learnings on the art of conflict management and alternatives to violence, and community living, and even learnt to lobby for the end of nuclear weapons on the international scene.

Can we bring new life to these stories in a way that finds contemporary audiences? Now is the time of Youtube, not the age of the pamphlet.  For that reason, the three of us – Wies Schuiringa, Elizabeth PO’ and Adrian Glamorgan  – have started to work on producing two videos (one on our history of the peace testimony in Australia, another on nonviolent ways and means) which bring to life some of the stories of the work done by individual Friends, and by Quaker Meetings past and present.   This means we are also asking regional meetings to recollect and share with us (and thus each other) their own history of action for peace.

Our process is emergent, and of course time-consuming, but we have also found it energising and illuminating.  We hope Friends across Australia will join this discovery by inviting regional meetings to meet, recall, and to catalogue these stories for future benefit, and sharing this with us.  They may not always provide answers, but spark new questions – like Sydney Parkinson’s. Together we will keep alive the connection with, and the movement of, the Spirit amongst Friends.

If our sample two videos are successful, they could be of use for inreach, outreach, our website and to show at suitable events or occasions. These videos may strengthen our ideas and our work for peace as well as inspire other people to find ways to work for peace. The peace testimony was written in a different era and circumstances than we live in now. However, it has not lost any of its validity or originality to denounce fighting with any weapons.

“We utterly deny all outward wars and strife, and fighting with outward weapons, for any end, or under any pretence whatever; this is our testimony to the whole world… The Spirit of Christ by which we are guided, is not changeable, so as once to command us from a thing as evil, and again as to move us unto it; and we certainly know, and to testify to the world, that the Spirit of Christ, which leads us unto all truth, will never move us to fight and war against any man with outward weapons, neither for the Kingdom of Christ, nor for the Kingdoms of this world… Therefore we cannot learn war any more.”

The concept of “recognising that of God in everyone” came from that same era. It also still has great validity as the de-humanising of people who “are not like us” continues today and legitimises physical and emotional violence.

The video project hopes to capture Quakers and peace in Australia and draw on these faith foundations.

Sydney Parkinson’s botany engravings are precious to many Australians, for the value of their artwork alone, as well as the first European artist’s renderings of botany and even the kangaroo: but to Quakers, his depictions of that moment of confrontation on Botany Bay is an invitation for us to think about the country we have made our home, and answer that challenge to make peace here and abroad when war has always been such an obvious option.

We all have a challenge to make our home as we would wish it. As Quakers we take Sydney Parkinson’s engravings to be precious for more than their descriptive storytelling: his depictions of our vast land’s flora and fauna remind us of the creative adventurousness that continues to inform our storytelling, and our collaborative wisdom around the work of peace has always remained relevant.

“The World War I Exhibition,” https://www.quakersaustralia.info/resources/exhibitions

Adrian Glamorgan commences as Secretary of the Friends World Committee on Consultation for Asia-West Pacific Section on 1 July 2021.