I was born in Frankfurt A/M (am Main) in Germany on the 24 February 1938. In March the following year my parents, my two sisters and I left Germany as refugees for Australia. My parents, Max and Erika Wohlwill almost immediately fell in love with Australia. My mother always said that as their ship sailed into Sydney harbour it felt as though two arms were held out to welcome them.

My parents soon took it in turns to attend evenings at Devonshire street where the Quakers gave illustrated lectures to refugees on Australian life. Before long  they became members, my father declaring that he had always been a Friend in his heart.

We moved to Beecroft, then a bush suburb in north western Sydney when I was three years old. Dad would take us to Devonshire St Meeting on Sundays where we attended Sunday School with the Swann sisters who told us Bible stories. We crept into Meeting for Worship for the last 15 minutes and I remember counting hats and listening to the shouts from the nearby terraces to pass the time away.  My father said that if I was really open to the spirit I would not hear those shouts! 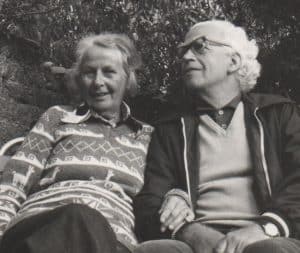 I was quite devout as a young girl and attended various local churches especially the Catholic church. I told my mother I would like to be a nun. But eventually my love of theatre prevailed and while I worked for three years at the Daily Telegraph I spent every spare moment at the Studio Theatre in the city.

Our growing up years in the bush were very happy ones with considerable freedom to play in the bush, build bush houses and boats to sail in the local creek. My two older sisters were great companions. We acted plays for our parents birthdays and at Christmas time. One year Mum organised a Nativity Play at Devonshire Street much to the alarm of some of the more conservative Friends.

After three years in the city I worked as a governess on a sheep property in Wilbriggie in south west NSW. During this time I formally applied for membership of Friends and was visited on the property by Lloyd Williams. After my return to Sydney I married David Willis and moved back to Beecroft where we had two sons, Simon and Anthony. I eventually enrolled at the University and became a lecturer in Politics and Women’s Studies, the latter controversially  introduced by a few of us amidst much scepticism.

Both David and I were heavily involved in the establishment of Wahroonga Meeting together with my parents, Enid and Eric Pollard and Rudi and Hannah Lemberg. It was an exciting time seeing Wahroonga become a big Meeting with many children with whom we put on numerous plays. I taught Sunday Children’s meeting somewhat differently from the Swanns, and with considerable enjoyment. My two boys were encouraged to act, both at home and at the Meeting. Every year our family would put on a Nativity play for our parents, a tradition started by my father when we were young.

My marriage ended in 1975 and eventually I came to live in the Blue Mountains with my partner Myra Hutton. I have been involved with Blue Mountains Meeting for many years serving as Clerk, and on various committees. One of my great delights was to be involved with the Schools Peace Prize funded by the generous bequest of Nancy Shelley, a Friend from Canberra who was a member of our Meeting. 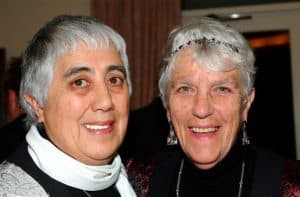 Two years ago Myra and I launched the Blackheath Theatre Company, a long time dream of mine. We have held several workshops, and performed four plays so far, one written by Myra for the theatre.

My life has been very full. I have written and travelled and been involved in the local community. Together Myra and I travelled the Camino and the Silk Road and visited many other places. Last year we travelled 14,000 km in Australia exploring some of the wonders of this huge land.

I now have eight grandchildren and one great grandchild, five of them in London and four in Canberra. My sons have given me much joy as I followed their life journeys.

I regard my parents along with several wonderful women as the major influences in my life. Two women Friends provided much inspiration to me, Margaret Watts an intrepid peace worker and traveller and Dorothy Gregory whose stories of China sparked a love of that country which I have since visited four times. My academic colleague, the late Professor Jill Roe was a mentor, friend and an important challenge to me. Most of all my adventurous mother and my loving and accepting father provided unique challenges and guidance in my life.