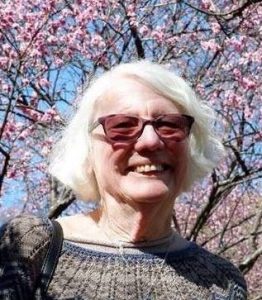 When I reflected on how I came to be a Quaker, I kept going back and back, following the strands of influences in my life, to my earliest memories of childhood. So I think, in order to answer the question, I’ll have to start there and develop the answer in a meandery kind of way, following those various strands forward until now.

I’ll be seventy-five this year, which means I’ve been alive for three quarters of a century. The world has changed so much in that time and, probably, so have I. Being born during the war, I don’t qualify as a Boomer, and I don’t even know if our generation merited a label or if we’ve just had to manage without.

I don’t, of course, remember anything of the war years, but I do recall something of the aftermath. Searchlight beams crisscrossing the night sky, my mother explaining that their purpose had been to locate enemy aircraft. I have no idea why they were still being used, but they certainly form part of my childhood memories. A bit scary, even if no aircraft were likely to be caught in the beams. 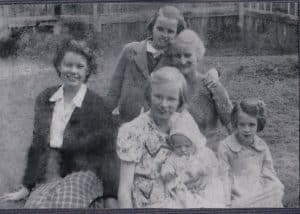 Baby Kerry with mother and sisters

Mum had some friends who would come and visit each week, and, while rationing was no longer a thing, they’d each bring their own little pat of butter to put on sandwiches for lunch. Perhaps other stuff as well, but it’s the butter I remember. War meant sacrifice and deprivation, even in the domestic realm.

And the one-armed men, returned soldiers Mum said, who operated the lifts in department stores.

My mother was the guiding light of my life and she would talk to me about war. Two of her brothers had served in the Great War and an uncle had been killed. Dad had been in the army during World War II. Only posted in Australia, but away in army camps much of the time, leaving Mum at home with eight children to care for. Mum would tell me that “War is a terrible thing. Ordinary men sent off to fight and kill other ordinary men. A terrible thing.” So that’s what I knew about war.

I had such a happy childhood. I was the ninth of ten children my mother gave birth to, twenty years between the eldest and the youngest. Imagine. Good Catholics of course.

Coming at the end as we did, my younger brother Michael and I were the darlings of the family, cooed over and coddled by devoted older siblings. I didn’t even know we were poor. Not poor enough to go hungry, though there were little things. At school, I envied the girls who had collections of coloured pencils in beautiful wooden cases. I only ever had a small pack of six half-size pencils, and no pencil case. It’s the little things you remember – the little inequalities 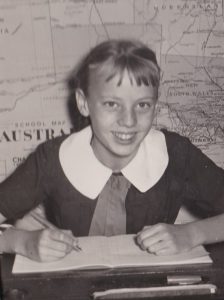 After a shaky start (school being nothing like my loving home environment) I came to enjoy school and do well at it. I remember after one test, having to admit that mine wasn’t the top mark. (Being “a clever little thing” was a role I played in the family.) When I told Mum whose was top, she chided me with, “Fancy letting a boy beat you!” That was a message I’ve carried all my life. As a girl, as a woman, I had a particular task to fulfil. I was encouraged to excel, and being female was never presented as a limitation or impediment. In fact, it was a challenge. I was a feminist for life.

None of my older siblings had completed high school, but I was offered an Education Department scholarship that would pay me an allowance for my final two years at school. Higher education was a strange land which was totally foreign to me and to my family. But as my time at school neared its end, the nuns there – bless them – said, “We think you should apply for this”, and gave me a form to sign. I really had no idea what it was. Turns out it was an application for an Education Department Fellowship which would fund me to study at university for four years – a Science degree plus a Dip Ed. And that’s what I did. Thank you Sisters. Our future does not have to be determined by our past. Privilege (or lack of it) is not necessarily inherited. 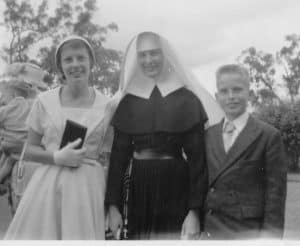 Kerry with Michael and sister Ann

My family were very devout. Catholic to our bone marrow. A picture of the Sacred Heart on the dining room wall, a small statue of the Blessed Virgin in the lounge room, a crucifix on the cabinet beside my parents’ bed. We said the Rosary as a family every night and attended Mass together every Sunday. Being Catholic was something that permeated our lives – an unquestioned and essential part of our collective identity.

It was in that context that, in my third year of university, I fell in love. Unwisely. There were many reasons why it wasn’t a good idea, one of them being that three generations of his family had proudly worshipped at the Methodist church on the opposite corner to our Catholic church. That mattered. It mattered a lot.

Of course, I thought that Love Conquers All, and so, when I finished university and a week before I started teaching, we were married. 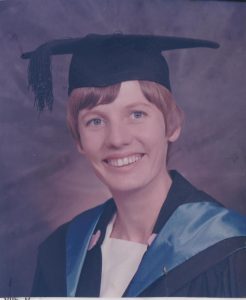 Early in the piece I realised that, if our marriage were to survive, I would have to let go of my Catholicism. That was more traumatic than I can say. The loss of something precious that was so much part of my identity. My alienation from family. The pain that caused them. And me. A pain we could never speak of.

So I went along to the Methodist church (not that one on the corner) and tried to fit in, but it was never really right. I always felt like something of an interloper, a misfit. So, after a while, we just stopped going. And I entered into a spiritual wilderness.

But there was still, undeniably, a spiritual part of my being. Something that needed nurturing and connection. I had come across Quakers in my reading over the years and there was something there that appealed to me. It felt like a place where my pacifism and feminism, my sense of social justice and the mystical side of my Catholicism might find a home. I even looked up Quakers in the Encyclopaedia Britannica, but I found the talk of “clerks” and “minutes” just plain puzzling, as well as very bureaucratic sounding. I didn’t know where else to go with it, so I just let it be.

In the early 1980s we went to live in Mackay in North Queensland. (Yes, we were still married, and now with three children.) There I met my first real Quaker. Someone whose name I can’t even remember, and who wasn’t around for very long as it turned out. And Jess and Peter Daughtry who were also what you might call Quaker-ready. Anyway, we started having little Meetings for Worship together. Probably highly irregular, but we just did it.

We must have become official at some stage, because we became involved with occasional gatherings of North Queensland Friends, including David and Trish Johnson, Susannah Kay, and on one occasion, the visiting Topsy and David Evans. Not a bad initiation into Quakers.

In 1988 we moved to Adelaide, and I went along to the North Adelaide Meeting House, seeking to become a proper Quaker. The first person I spoke to immediately asked, “Are you a member or attender?” I did find that a little confronting, but it didn’t deter me totally and look, here I am.

As to the other threads to this story. My parents both died around the time of our move to Adelaide, and my marriage finally unravelled. Since then, my relationship with my siblings has mellowed (we can now even use the Q word), and I am particularly close to Ann, the Sister of Mercy. My children are all doing wonderful things.

And that’s the story of how I came to be a Quaker – and the person I am today.