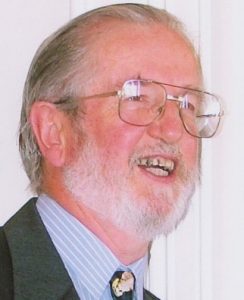 I came in touch with Quakers when called up for National Service Training in 1956. I was brought up attending a Presbyterian Sunday school, but came into conflict with the minister over the fact that Jesus said to “love your enemies”, yet Scots Church in Melbourne had military banners hung across it.

In 1956 the Methodist preacher Alan Walker was running a “Mission to the Nation” with a strong emphasis on peace and justice. At one of those gatherings I came across a bookstall run by Jim Newell (a Quaker attender at that time) for the Fellowship of Reconciliation, and bought a book by British Quaker Kathleen Lonsdale “Quakers Visit Russia”, and later her book “Is Peace Possible?” (Penguin Special, 1961). This, and my objection to compulsory military training in 1956, during the Suez crisis, brought me to Friends. I joined Quakers in 1959 and later became Clerk of the Melbourne Regional Meeting. My family’s life centred around the Melbourne Meeting for many years.

I studied physics at University of Melbourne, with a Ph.D. on atmospheric ozone in 1963, and was active as a student in the 1950s and early 1960s in the Aboriginal Scholarship scheme, ABSCHOL. This led me and a fellow student, Philip Boas, in 1956 to hitch-hike around NSW and Queensland to see why we had no applications for scholarships. It was obvious – they were living in poverty in shanty settlements on the outskirts of country towns.

I was also involved in my student days in the Victorian Association for Immigration Reform, with such stimulating people as James Gobbo (later a Governor of Victoria), Ken Rivett and Jamie Mackie, who wrote the booklet “Control or Colour Bar” in 1960.

I did a post-doctoral year at the National Center for Atmospheric Research (NCAR) in Boulder, Colorado, in 1963-64 working on ozone in the atmosphere. This place was chosen partly to meet D’Arcy McNickle, a Flathead Indian, author and academic, who enabled me to learn more about the rights of the Native Americans all over the USA. On conclusion of my stay at NCAR I drove around the United States visiting American Indian communities, which had local self-government and land rights and their own police forces and tourist industries. I also stopped off in New Zealand to see the state of Maori-Pakeha relations in 1964, and there I met in passing Whetu Tirikatene, the daughter of a Maori member of parliament.

In 1965 I was recruited to CSIRO, researching first on ozone as a tracer of atmospheric transport, and then as a climatologist, retiring in 1999. My work on climate has included research on ozone, potential pollution of the upper atmosphere by supersonic aircraft, the environmental consequences of nuclear war and climate change. In the 1990s I led the Climate Impact Group in CSIRO, until my retirement. I contributed to, or was a lead author of the 1990, 1995, 2001 and 2007 reports of the Intergovernmental Panel on Climate Change and published more than 200 other reports and papers as well as three books on the topic.

Although Friends traditionally don’t always accept awards, I have done so to reflect, in part, on the work done together with my colleagues. I was awarded a Public Service Medal in 1999 and my group won the Sherman Eureka Prize for Environmental Research in 2003. When the Nobel Peace Prize was awarded to Al Gore and the Intergovernmental Panel on Climate Change in 2007, I had about a one-thousandth share in that prize as a Lead Author.

On my return from the USA in 1965 I was invited to speak at the annual conference of the Federal Council for the Advancement of Aborigines and Torres Strait Islanders (FCAATSI), and it was there that I met Diana James, a young Presbyterian who was at that time in the company of Whetu Tirikatene, who was then studying at ANU in Canberra.

Later in Melbourne I caught up with Diana at a Victorian Christian Youth Council meeting where she was a Presbyterian representative and me a Quaker. We got married a few months later.

Back in Australia I maintained my interest in Aboriginal affairs and was invited on to the executive of FCAATSI as convenor of their legislative reform committee. This committee’s task was campaigning for the Indigenous Referendum in 1967. In 1969-70 I was a supporter of the constitutional change for Indigenous control of FCAATSI. This was defeated at the 1970 annual conference in Canberra, when, after the rallying by Kath Walker and Doug Nicholls, the National Tribal Council (NTC) was formed. I was the only non-indigenous member elected to the NTC executive, in a non-voting capacity. Its demise came in 1972, largely due to not being funded.

Friends invited me to give the 1969 James Backhouse Lecture which I entitled “Toward Multi-Racial Society”. This sold some 8,000 copies in three editions. It must have been timely. Rather than quote from it, however, I will quote on the lighter side, an associated limerick which I wrote:

James Backhouse came on a Cook’s tour,
To see what convicts endure.
The Aborigines too,
Came under review,
For right, not might, to secure.

I have more recently been working advocating large-scale renewable energy development in remote regions of Australia in part to provide employment and income for Aboriginal communities suffering from lack of employment and associated social problems.  I am also advocating all-electric vehicles using renewable energy and storage, including express electric buses on main roads to ease traffic congestion. The researches in using renewable ammonia as a fuel and as a means of transporting energy are exciting developments. These are newly being implemented.

Diana and I have three sons, Jamie Pittock at the Fenner School ANU; Mathew Pittock, an automation engineer; and Chris Pittock, a plant geneticist. My beloved partner, Diana, has been an artist in metal and fabrics, and a community development facilitator and a mediator.

My memory is not what it used to be, but it is good to look back and realise that I have been supported by Friends for almost 60 years. 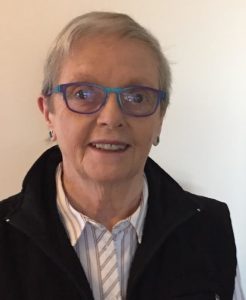 My contact with Quakers began when I met Barrie at Easter 1965 at the FAACTSI annual conference (Federal Council for the Advancement of Aborigines and Torres Strait Islanders) in Canberra. He had just returned from 2 years in USA doing climate research and looking into land rights of the south west Native Americans to compare with the Aboriginal situation here.

I attended FCAATSI from the Presbyterian youth group (PFA) to see whether to affiliate with FCAATSI. Barrie and I met briefly there. However, in Melbourne we then found we were both on the Victorian Council of Churches Youth committee – he from Quakers and I from PFA. By that time, I was rather disillusioned with the church and my belief in what I understood to be my path, which I believed was to work with Indonesian friends in youth work in Indonesia. My health prevented that.

A belief that there is a spirit within people, that it was important to treat well, had become important to me. Barrie spoke of “that of God in people” which made sense to me. We were married in September that year and a full family life started with the births of Jamie, Mathew and Chris. Our life was centred to a large extent in the Local Quaker Meeting in Toorak.

Infant teaching was my first profession for 6 years in the state education system, but I stopped when the boys were born. I was active in local community activities, assisting in establishing a “neighbourhood house” and in peace and women’s organisations. My interest was in effectiveness of community groups. This I developed further when we lived in USA in 1978/79. I trained in nonviolent social change with Movement for a New Society, a Quaker-based social change group. I wanted to know particularly about dealing with conflict in groups and communities.

On returning to Melbourne at the end of 1979, I joined with three others to form the Nonviolent Training Collective to train nonviolent protesters to stop the Franklin Dam in Tasmania being built. The training group had expanded with trainers going to different states and people coming to us for training. The training spread throughout the country and the dam was stopped by the Federal Government in March 1983. Forest campaigns, Palm Sunday Rallies, Iraq War protests, Women’s anti-ANZAC actions, etc. were issues for which we trained people.

At the same time, I was assisting community organisations in their planning: aims and goals, strategy planning, working together as colleagues, consensus decision-making, listening, negotiating, conflict resolution, etc. Peace groups, women’s organisations, forest action and other environmental groups were keen to use such training.

In about 1986 the Victorian Government established the first four Neighbourhood Mediation Centres to deal with issues of fences, dogs barking, trees, etc.  I was asked to train some of the mediators for that program. This training continued for some years, and as well, I was asked to run two fascinating programs. At Melbourne University’s International Conflict Resolution Centre Di Bretherton asked me to conduct a 40-hour mediation program for professionals. They brought their skills, experience and understandings. In what situations could they be “objective” mediators especially if they already had a relationship with a client with a dispute? Stimulating discussions!

At Victoria University, I was asked by Michael Hamel Green to facilitate an elective in conflict resolution in groups and communities with adult students from Asia, the Pacific and Africa. This had an underlying theme of cultural difference. It was wonderful, sharing what is often taught here for their consideration, and would any of it be useful in their situations? We learned from each other.

Since retirement my involvement has been with Indigenous issues a little, and reading new Aboriginal and related books by Alexis Wright, Bain Attwood, Richard Broome, Sue Taffe, etc. I was on an Indigenous Advisory Committee to the local council. Helping with the grandchildren, keeping Barrie and me as well as possible with him now 80 and me catching up keeps me busy. Being a Grandmother Against the Detention of Asylum Seeker Children and lobbying politicians adds to my involvement.

In the early 1980s I went back to my metal work and enamelling work, having started it as a hobby in the 70s, then studied in an advanced course in USA. I continued with the course in Melbourne and in fine arts. Art is a big part of my life – appreciating it, and now working with textiles.

The importance of meditation is evermore present and grounding. Being an Elder in Victoria Regional Meeting and attending Melbourne City Recognised Meeting is a focus of our lives; a rich spiritual life – as well as the tasks that accompany it. Having a monthly worship sharing group at our home is helpful, and I try to think on the Advice: “Let your worship and your daily life enrich each other”.