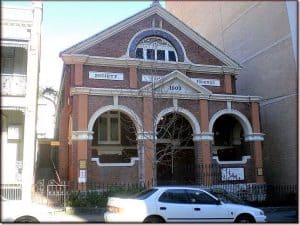 Devonshire Street Meeting House is the 2nd oldest Meeting House in use in Australia. Built in 1903, it is somewhat younger than the Adelaide Meeting House which arrived from England in 69 packages (together with 3,300 slates) in 1840.

The previous Meeting House in Sydney had been built in the Friends Burial Ground in the Devonshire Street Cemetery in 1868. The resumption of the cemetery in 1901/2 for the expansion of Central Railway Station meant that a new home had to be found. The government provided £2,000 in compensation. Sydney Friends

“felt that they had a religious duty to serve the needy, and decided that they would establish what they saw as a “mission” church in their old locality. The Surry Hills area of Sydney at that time was a depressing inner-city slum of mean streets and ramshackle old houses where, it was said, it was safe for no young woman, except perhaps a Salvation Army lass, to venture at night. Friends found that two cottages in Devonshire Street, not five minutes’ walk away from the old Burial Grounds site, were available for purchase at a cost of eight hundred pounds. Four public houses of no great repute were near neighbours….”

It was the earnest hope of Sydney Friends that “the opening of our new Meeting House may prove the occasion of much blessing to us all, and a fresh start on the part of the Society towards greater usefulness in this grand City and State” (ibid). Sydney Friends’ mission to the local population has taken various forms over the years and was most significant from the 1880s until the end of WWII.

Wardens have served the Devonshire Street Local Meeting (DSLM) since 1975 and, since the Meeting House (Friends House) was renovated in 1999, improved accommodation has been available for both the Wardens and travelling Friends (and friends and family of Friends).

The Surry Hills area has changed considerably over the years and is now a thriving, eclectic mix of largely rejuvenated private housing, some public housing, offices, cafes, restaurants, shops, clothing outlets, colleges, galleries, the award-winning Surry Hills Library, the Belvoir Theatre and, yes, still a number of “public houses”. There are two parks close by (one with a swimming pool under construction) as well as a cycle track installed by the City of Sydney Council. Friends House is just 5 minutes walk from Central Station.

Friends at Devonshire Street are seeking two Wardens for a 12 month period from the beginning of November, 2012.

The Wardens’ role is a voluntary one, and the Meeting supplies a semi-furnished 2-bedroom loft flat with services.

The Wardens are responsible for the general care and oversight of Friends House and there is ample opportunity for developing relationships with Friends, community and social justice groups and overnight guests. Quaker Service Australia (QSA) is based at Friends House.

The position would best suit active retirees or people in part-time employment, as some presence is required during the day to welcome guests and hall users. The Wardens are well supported by the DSLM House Committee.

The Wardens need not be Members or Attenders, but are expected to be in sympathy with Quakers, and to understand Quaker testimonies and processes.

Come and spend a year in Sydney and enjoy what inner-city living has to offer!

Applications close at the end of July 2012 and should be sent to the above email address or posted to: