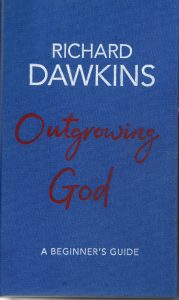 Richard Dawkins is undoubtedly one of the great science communicators of our age.  Starting with The Selfish Gene in 1976, he has produced a veritable library of books describing evolution in a range of vivid metaphors.

Unfortunately along the way he inevitably crossed horns with the Creationists who objected to Dawkins’ concept of a world without a Divine Creator.  Dawkins was diverted into a campaign against all religion, notably with The God Delusion (2006). Outgrowing God is his latest in this genre.

I found this book confusing, in that it is difficult to define its target audience.  The opening chapters seem to be aimed at not-too-bright fundamentalists, hardly the people who are going to pick it up.

Dawkins begins by pointing out there are many gods – “they can’t all be right”.  He then questions the historical accuracy of the New Testament, while placing no value on its mythical content.  Then an even easier target: the goodness of God called into question by some of the unpleasant “words of God” in the Old Testament.

His chapter asking “do we need God in order to be good” raises some interesting questions, but questions covered much better by Richard Holloway’s Godless morality which I reviewed in The Australian Friend in  September 2013.

The second part of the book, “Evolution and beyond,” is far better than the first, as Dawkins moves into his area of expertise.  He presents an outstanding range of phenomena which appear to be evidence of design, including gazelles being chased by cheetahs, crystals, genetics, embryology, the evolution of altruism, and cosmology, amongst other things. He then explains how they have come into being by natural processes.  Even quantum theory and Schrödinger’s cat get a mention.

Dawkins praises the courage of people like Galileo and Darwin to follow their scientific leadings to unpopular conclusions.  He encourages the reader to be similarly brave, with the condition: “Plenty of people propose daringly surprising ideas and are wrong, crazy wrong. Courage isn’t enough. You have to go on and prove your idea right.”

Theologian Karen Armstrong has complained that it is impossible to argue with people like Dawkins because they know no theology.  Dawkins, on the other hand, has said that theology is what theologians discuss among themselves, and that the average person in the pew knows no theology but accepts what they are told as literal truth.

Dawkins, despite what some may want to believe, is not a heartless realist.  His humanity is revealed in many places in his writing, particularly in Unweaving the Rainbow where he shows that an understanding of science inspires human imagination and increases our wonder of the world. In Outgrowing God he recommends that we read Ecclesiastes and the Song of Solomon as poetry.  Nevertheless, the God that Dawkins doesn’t believe in seems to be a mechanistic creator, not an immanent God, and certainly not the Spirit within.

In an interview with Charlie Pickering, Dawkins was asked, if he had to pick a religion, what would he choose.  His choice was Quakers, because they think about things. This book, however, may help Dawkins’ “beginner” to outgrow God, but I doubt it is the God of any Quaker.

Outgrowing God: a beginner’s guide by Richard Dawkins was published in 2019 by Bantam Press, an imprint of Transworld Publishers, London.