Book Review: Hope in Hell – A decade to confront the climate emergency 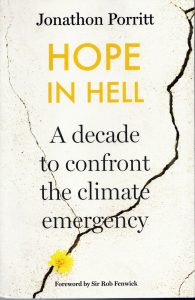 This book is written by Jonathon Porritt, an activist, and is principally a call to action.  It contains enough background information on the climate emergency to cause alarm, then asks why there is not more motivation to act. Above all, it is concerned with hope.

Porritt offers this definition of hope from the US author Rebecca Solnit:

Hope is an embrace of the unknown and the unknowable, an alternative to the certainty of both optimists and pessimists.  Optimists think all will be fine without our involvement, pessimists take the opposite position; both excuse themselves from acting.  It’s the belief that what we do matters, even though how and when it may matter, who and what it may impact, are not things we can know beforehand.

Porritt sees hope in the growing activism of the young, and in surveys which show that a growing number of people want more action on climate change (although a CBS poll in the USA in 2019 showed that up to a quarter of citizens still thought climate change could be a hoax).  More businesses (especially the insurance industry) are aware of risks associated with climate change, as are investors.  There is also hope in the falling costs of renewable energy.

But attitudes are not being translated into sufficient action. Porritt points out that the last five years “have seen the election of arch-denialist Donald Trump, the election in Brazil of Jair Bolsonaro…, the re-election of the incorrigibly pro-coal Scott Morrison in Australia, the wilful ambivalence of Justin Trudeau in Canada (signing up to a Climate Emergency one day, and signing off on a multi-billion oil pipeline the next day), and the tragic loss of the UK as a consistent climate leader with the EU.”  Global emissions are not falling.  According to the 2018 Special Report of the International Panel on Climate Change, in order to keep to a temperature rise of 1.5°C global carbon emissions have to peak by the end of 2020, and reduce by half by 2030.

In the chapter on sea level rises, Porritt tells us “We should be preparing for a sea-level rise of at least 1 metre by 2100, probably 2 metres and possibly 3 metres.” So how are we to maintain hope?

Porritt looks at other campaigns which began as apparently hopeless and went on to success, particularly the campaign against slavery and the campaign for votes for women.  The original promoters of these campaigns were regarded as fools or extremists, and went on to be heroes.  Porritt gives a wonderful quote from one of the earliest campaigners against slavery, William Lloyd Garrison back in 1831:

I do not wish to think or to speak, or to write, with moderation.  No!  No!  Tell a man whose house is on fire to give a moderate alarm.  Tell the mother to gradually extricate her baby from the fire into which it has fallen.  But urge me not to use moderation in a cause like the present.  I am in earnest – I will not equivocate – I will not excuse – I will not retreat a single inch – and I will be heard.

Today’s climate activists will sympathise with these sentiments!

Porritt goes on to point out that in some ways the above campaigns were unlike the current campaign to save the climate.  Legislation abolished the slave trade.  Legislation enacted votes for women.  The campaigns had an end point.  But there is no end point for action on the climate.  What is needed is a change of attitude to the environment.  This is a moral and spiritual challenge, not just a technical one.  In a section titled “Spiritual Truths” Porritt says:

“The climate crisis goes right to the heart of who we are, and demands of us a response that cannot be entirely met by confronting the science, or committing to political and campaigning action.  In many ways, the climate crisis is a spiritual crisis, laying bare the cumulative consequences of allowing ourselves to have become so completely disconnected from each other, from the world around us and from our basic responsibility for all those who come after us.”

The moral issues are ones which Quakers are well aware of.  There is the issue of peace.  Porritt rejects militaristic imagery in the context of the climate emergency.  “We are not ‘under attack’ from climate change; it’s not the CO2 or the methane that’s putting our civilisation at risk, but rather the political system (and the military-industrial complex behind it) that continues to promote aggressive, carbon-intensive economic growth – whatever the consequences.  From that perspective, any serious attempt to address today’s Climate Emergency must include an explicit condemnation of militarism (and of the arms trade in particular), and a concerted effort to reduce military expenditure, year on year, for the foreseeable future.”

Then there is the issue of equality: “We already have ample evidence that the Climate Emergency acts of ‘an amplifier’ of social inequality, disproportionately affecting the poorest and most vulnerable in society.  It’s simply impossible to imagine humankind successfully navigating the decades of radical decarbonisation ahead of us without addressing the deep, structural inequalities that blight the lives of so many billions of people today.”

On the issue of simplicity, Porritt quotes from Pope Frances’ encyclical (Laudato si’:  On Care for Our common Home):

“When people become self-centred and self-enclosed, their greed increases.  The emptier a person’s heart is, the more he or she needs things to buy, own and consume.  It becomes almost impossible to accept the limits imposed by reality.”

On the subject of integrity, Porritt has a chapter entitled “Tell the Truth”.  Climate activists have long been described as extremists.  Politicians like to talk about moderation and compromise.  But Porritt feels that the time for sugar-coating the truth has passed:

“Much of what needs to be done needs to be done in the next decade.  Indeed, we need to halve emissions of greenhouse gases during this decade if we’re to stay below 1.5°C threshold by the end of the century – I keep coming back to that one all-important scientific conclusion to help dispel any false hope that anything less ambitious might still be sufficient.  What that means in practical terms is that we need to cut emissions by 7.6 per cent every year throughout the coming decade.”

The book begins with a quote from Dante: “…leave Hell.  And again behold the stars.”  Do you remember seeing the stars during the COVID lockdown?  It is an image to hold onto.