A Reunion of the Worldwide Family of Friends 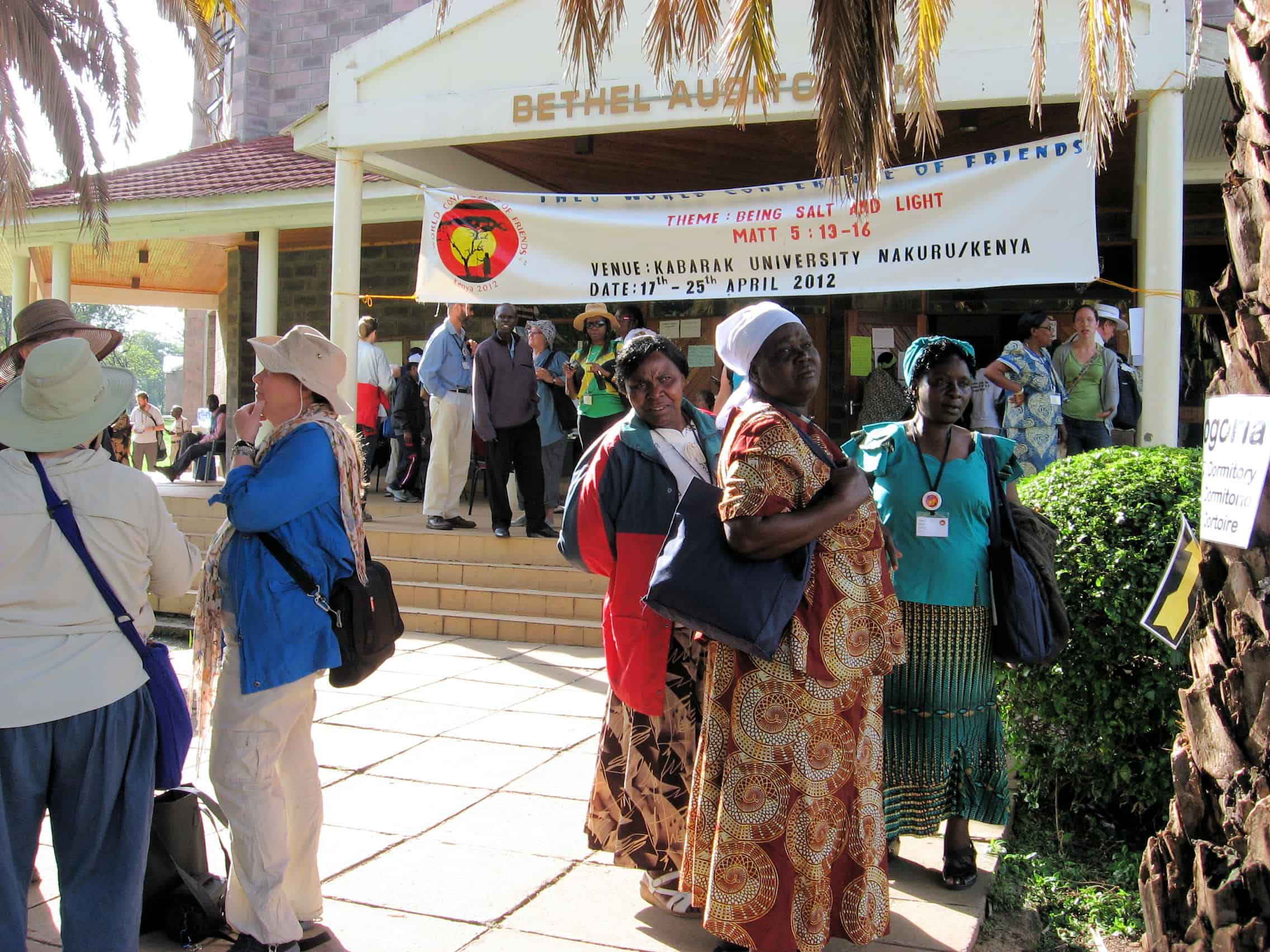 Some 850 members of our worldwide family of Friends from 51 countries came together from 17 to 25 April at Kabarak University in Kenya to share food, lodgings and spiritual nourishment. Expectations were high that we would unite behind one particular project or at least deliver some prophetic message to the world at this ‘once in a generation’ World Conference.

As often happens at family reunions, our worldwide family was initially delighted and even a little overawed that we’d grown so vast and spread so far from our rural roots in England more than three centuries ago. We looked around and marvelled that our family had so many different languages, skin colours and forms of dress, and, at a deeper level, so many different customs and issues that we regard as important.

Over nine days we came to understand that the different cultures in which Quakerism has taken root have deeply influenced the terminology we use, and the ways we worship, interpret our testimonies and express our faith in action.

Kenya accounts for the largest concentration of Quakers in the world, so Kenyan Friends made up at least half the Conference registrants. From the moment of arrival at the airport in Nairobi, I felt enveloped in their hospitality and warmly welcomed. In fact, ‘Welcome’ was the standard greeting from Kenyan Friends. Conversation flowed easily once name and country of origin had been established from our badges.

Groups from each of the FWCC sections led us all, one huge assembly in a vast auditorium, in worship according to their traditions. Speakers—often Young Friends—from each Section offered powerful ministry on the conference theme, ‘Being Salt and Light: Living God’s Kingdom in a Broken World’. Four languages were in use—English, Kiswahili, French and Spanish—with interpreters providing on-the-spot translations.

For me, moments of illumination came in the ‘quiet processes’ of early morning unprogrammed worship and in the ‘small circles’ of my home group and the two ‘thread groups’ I joined. There I felt able to digest the rich ministry offered in the large gatherings.

I was reminded at the Conference that Rufus Jones wrote his well-known words—I pin my hopes to quiet processes and small circles in which vital and transforming events take place—in a letter expressing his initial hesitation about accepting the invitation to preside over meetings of the second World Conference of Friends held in the US in 1937. This much-loved quotation is preceded by In regard to the World Conference, I sincerely hope for good results, but I have become a good deal disillusioned over ‘big’ conferences and large gatherings. However, even this last comment was then followed by: But others see differently, and I respect their judgment.

At this sixth World Conference I sensed a move to find new technologies to bring us together in large gatherings in new ways. And yet my most vivid memories from the Conference are of face-to-face encounters, cheerful cooperation in the face of adversity, chance conversations and unexpected challenges. One such challenge occurred over the meal table when a Kenyan Friend struggled to define a ‘real Quaker’: ‘Some Kenyan Quakers have two wives. Are they real Quakers?’ she asked. ‘Can you be a real Quaker and drink alcohol? We’ve heard that Quakers overseas drink alcohol.’

The testimony of Rwandan Friends about the loss of family members in the genocide and the ongoing work of healing and reconciliation in their communities moved me deeply. The reason is that my personal history intersects with that dark time in their country’s history. My teenage son died peacefully from cancer at home in Australia surrounded by his family, at a time when the media was revealing stories of mass slaughter in Rwanda. Rwandan Friends told us that the perpetrators of that genocide will soon be released from prison back into the community. They spoke of the urgent need to break the cycle of hate through healing and reconciliation.

Jocelyn Burnell (Britain Yearly Meeting) in her address acknowledged not just our ‘broken world’, but our own individual brokenness. She called on all people who had been broken by loss or suffering in the auditorium to stand. Most, if not all, did so and she stood with us—a powerful demonstration of our common ground. Perhaps our admission of brokenness as individuals and as a Society is the basis of what we have to offer one another and our ‘broken world’. 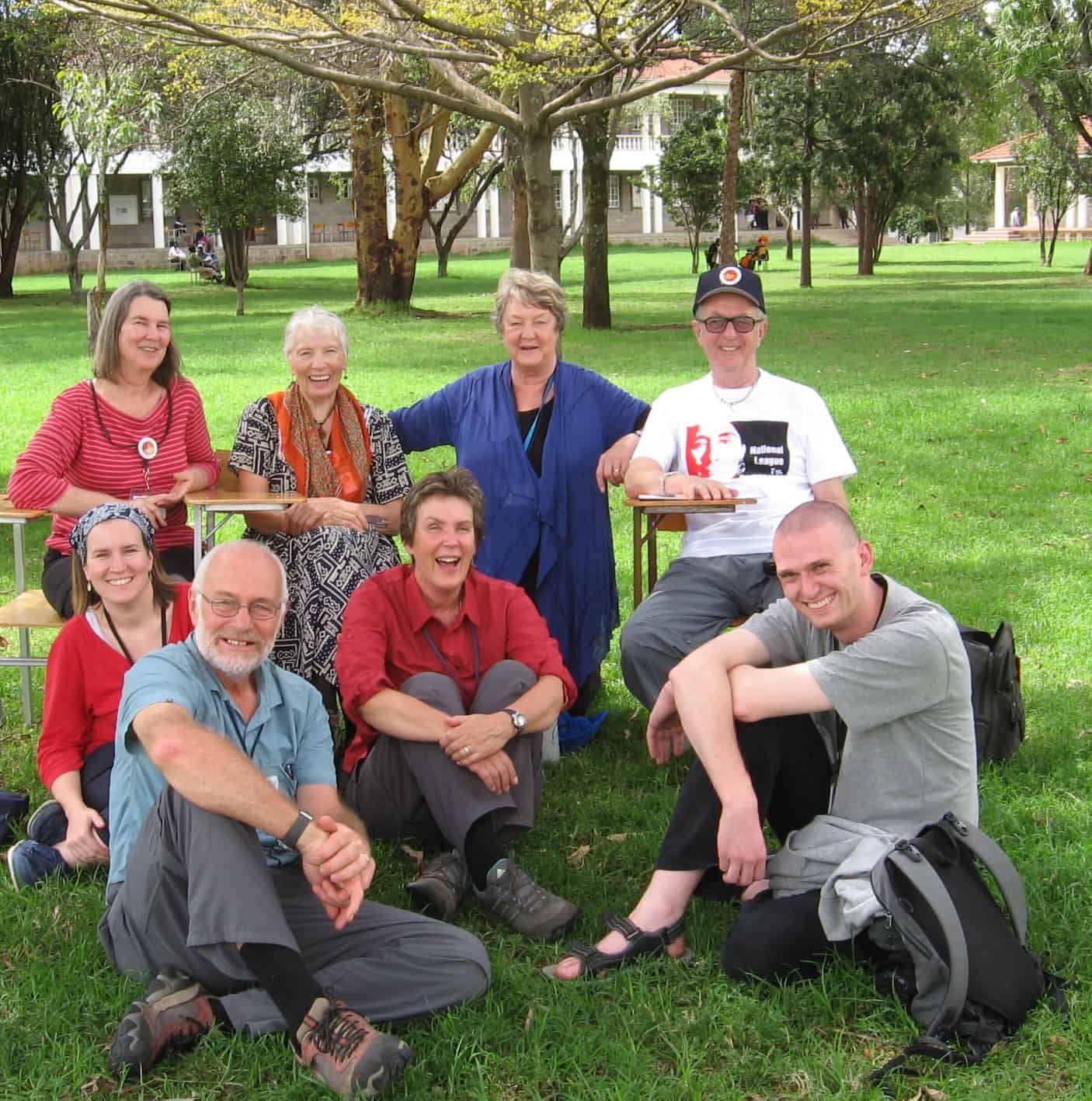 Home groups provided ‘small circles’ in which to ask questions, explore differences as well as similarities, and even express disappointment or outrage. Eden Grace, a US Friend resident in Kenya, facilitated mine. Her deep understanding of Quaker theology and knowledge of the Bible provided the necessary bridge between liberal, evangelical and conservative Friends. Having enjoyed the exuberance of African Quaker ‘praise and worship’, I wondered aloud in the home group whether my Quaker tradition provides a sufficient outlet for expressing joy. A Kenyan Friend balanced my uncritical enthusiasm for ‘praise and worship’ by querying whether it was sometimes entertainment, and not always directed at praising God.

In sharing stories in the home group of how we each put our faith into action, I was deeply humbled to learn of the work of Friends from countries where there is no safety net of social security benefits to catch citizens in need. One Indian Friend has felt led to provide education and an alternative future for young girls sold by their families to the temple as prostitutes. A Kenyan Friend provides food for homeless street kids in her town. The need is at their door, in their street, in their town and their response is direct.

Like many home groups, ours discussed attitudes to same-sex relationships. Recognition of committed same-sex relationships by some Yearly Meetings became an issue when rumours that an epistle from US Gay, Lesbian, Bisexual and Transgender Friends had been removed from the Conference noticeboard were substantiated. Liz Gates, Co-clerk of the International Planning Committee, told the whole assembly that the Committee was deeply upset at this breach of the spirit of the conference, and reminded us that we were all children of God.

Later, in our home group, a Kenyan pastor told us he could not reconcile affirmation of same-sex relationships with the exploitative relationships generated by the sex tourism industry in his country. A Canberra Friend explained how her Meeting had affirmed the committed relationship between two young men by conducting a Quaker marriage and how the men’s families had shed tears of relief that their commitment had been recognised by their spiritual community.

Divisions in our worldwide family also arose when Daniel Arap Moi, a former President of Kenya, now Kabarak University Chancellor, arrived to welcome us all. The Local Arrangements Committee members who had invited him addressed him as ‘Your Excellency’ and most Kenyans stood as he arrived and left the auditorium. After his departure, disquiet emerged that we had breached our testimony to equality by according the former president marks of worldly respect; and questions were raised about Kenyan Friends’ involvement in secular politics and the Kenyan Friends’ Church’s acceptance of favours from politicians. 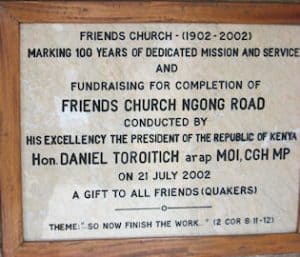 Thread groups provided another form of ‘small circles’. Our Quaker business practice, I believe, is one of the great gifts we can offer our ‘broken world’, so I attended ‘Spirit-led decision-making’. While instructing and leading us through exercises in writing minutes, Arthur Larabee (Philadelphia Yearly Meeting) ably demonstrated how a clerk works to create a gathered Meeting for Worship for Business.

In the ‘Quaker Women’ Thread Group, Kenyan women spoke of inequality of opportunity within their churches. For example, women may be clerks of Monthly Meetings, but men invariably hold the positions of Yearly Meeting clerks; and while women have been accepted as pastors for the past ten years or so, they are rarely permitted to officiate at important public events like funerals.

Again, these women were meeting needs right on their doorstep—one had accepted a widow and her children into her household when the widow could see no solution to her plight other than killing herself. When faced with discussion topics like, ‘How do you mentor young women into the life of the Society? ’I had to admit to the group that we rarely had such opportunities in Australia.

Reflecting on the Conference, I believe we found unity most clearly in living together, and joining together in song and in worship. We entered into many different forms of Quaker worship with open hearts and minds. We listened deeply to one another, engaged in robust but respectful conversation, acknowledged that our views diverged and made sincere efforts to understand each other’s viewpoint.

On the last morning, Jane, the Kenyan Friend in my dormitory, led us in prayer for our safe travel home. Filipino, Australian and Kenyan, we stood together while she thanked God for giving us this opportunity to live like sisters for a week.

A mood of optimism infused the final days of the Conference as the story of the group excursion to Lake Bogorio emerged—and was perhaps reshaped to meet our hopes and dreams. Apparently, officials at the entrance to the national park had tried to separate Kenyan from overseas Friends as different rates of admission applied. Friends, however, had refused to be divided, insisting ‘We are one people.’

Quaker faith & practice: the book of Christian discipline of the Yearly Meeting of the Religious Society of Friends (Quakers) in Britain, 4th edition London, 2008.