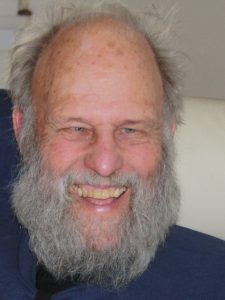 Jan tells me his life is made of out of four components – music, boats, peace, and Quakers. He says that music is his passion.

Jan started to learn to play the oboe, which he got for his 21st birthday, while he was still at university studying for an Arts degree. As he had plans of becoming a patrol officer in Papua New Guinea, he felt he needed a small instrument. However, after passing his ABC audition he played in orchestras in Australia and New Zealand for 7 years. These were possibly the happiest years of his life.

Subsequently Jan worked as a teacher, and looked after overseas students for the Commonwealth Office of Education and later administered Post-Graduate scholarships. These jobs did not give the same satisfaction, and Jan retired early at 55 years of age as he wanted to do peace work. While has was working for the Commonwealth he was a member of the Professional Officers Association, and was instrumental in introducing flexible working hours to the Commonwealth Public Service. He had hoped this would lead people to work when they were needed most, but he fears that in many cases they only took advantage of the freedom flexible hours offer.

His pleasure also came from building and sailing boats. He built four wooden boats in his flat at McMahons Point! When they were finished they had to be taken down the stairs (many of them!) or removed via the window down many stories. Jan also built his Duyfken, a 29 ft raised deck cutter, designed by Quaker Iain Ougthred, nearby. He was lucky to have many helpers and it was a very rewarding creative effort for 3½ years. This boat did not have an engine for its first 17 years, but Jan enjoyed the freedom of sailing alone, taking off whenever the tide and wind were right. Jan also formed part of the Peace Squadron, sailing out to protest against boats which carried nuclear weapons. This taught him to seek that of God in the American sailors, and to see them as probable victims in a nuclear war.

It is hard not to see Peace as the enduring passion in Jan’s life. His concern for peace probably has its roots in his multi-cultural background. He was born in Japan to Dutch parents with 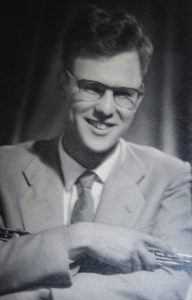 Music: Young Jan with his oboe

Huguenot ancestors – his father was a career diplomat who started work as a Japanese-Dutch translator. Jan’s first language was Japanese, learnt from a very young Japanese wet nurse. Jan was born premature, and his family credit his wet nurse with saving his life. Jan was educated in English at a Canadian school in Kobe, Japan. He subsequently lived in Canada, the USA, Holland, China and Australia. He has always believed in an inclusive society and inclusive worship. The first Church Jan belonged to was the Union Church in Peking, a church that united people of different Protestant faiths into one congregation. His father played the organ at this church, and at other Union Churches the family attended throughout the world.

Jan became involved in the Peace movement through the anti-nuclear movement in the 1960s. He learnt about non-violent action from the Quaker Peter Jones. He was secretary to the Peace Tax Campaign, and believes that no-one should be forced to pay tax for military purposes. He trained with Peace Brigades, and accompanied a Catholic priest who was returning to Sri Lanka from England as the priest had come under threat of disappearing due to his support of the fishermen in his parish. He had helped the fishermen to market their catch co-operatively and avoid exploitative middle-men. Jan, along with Jan-Louise Hamblyn and Jerome Fink from the Devonshire Street Meeting, were in the first Alternatives to Violence Program training course when Stephen Angel came to Sydney. He strongly believes that the peace activists should participate in all the decisions they are involved in, and that the peace movement needs to be non-hierarchical.

Strangely, it was not any of these activities which led Jan to Quakers. This came about when he was a member of the Christian Action Group, an ecumenical group which he tells me was more given to words than action. The group wanted a talk on Pierre Teilhard de Chardin, and the speaker Jan found for them was Rudi Lemberg, a Quaker biochemist . It was through Rudi that Jan came to attend Meeting for Worship. 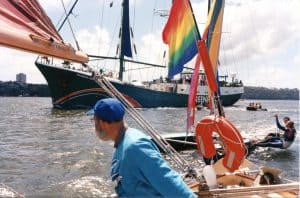 Boats and peace: Jan in the Duyfken with the Peace Squadron.

Asked about the most important peace issue of our day, Jan suggests the protection of refugees. He tells how he was twice a refugee. In 1941 he left Japan with his mother and brother on the last ship to carry passengers before the Second World War started in the Pacific. He was 9 years old, and settled in Toronto, Canada with his mother and younger brother. The Dutch ship only narrowly escaped being caught by a German raider because the captain made it difficult for the raider to follow accurately by heading straight into the sun. The slower ship managed to escape when it was able to hide in a rain squall.

Jan’s father Niek de Voogd, who was the Dutch Consul in Kobe, was responsible for saving the lives of 4000 Jews who had escaped from Europe via Russia. Many of these refugees had been helped by a Japanese consul, Chiune Sugihara, who was working in Lithuania. Sugihara produced thousands of hand-written transit visas permitting the holders to travel to Japan. However, before entering Japan, they were meant to have a visa to enter a third country. Jan’s father met the refugees and issued them with visas to travel to Curaçao in the Dutch West Indies. It is doubtful that any ever went there, but the visas enabled them to travel to countries en route!  Jan says there were three reasons why his father issued the visas:

Jan has always tried to follow these principles also.

After some time in Canada, the family lived in the USA, and then in Holland. Jan left Holland to join his parents in China in 1949 when the Dutch government asked his father to be the head of the mission that was to open diplomatic relations with China. In 1951 he left China, again as a refugee, to go to boarding school in Australia because it was feared that the Korean War would turn into a world war. This was the height of the McCarthy era in the USA, and Jan hated the lies being spread by both the Americans and Chinese. He did not want to study in the USA because he could not stand the propaganda that was fostered by the Voice of America about Chinese Communism, and he was aware that he would not be allowed to work to earn his keep in the USA while he was an overseas student.

But Jan cannot confine himself to one concern only! He is involved in planning the Quaker involvement in the Sanctuary movement. And while I was interviewing him at his flat he was preparing a letter protesting against the ability of our Prime Minster or Minister of Defence to declare war without bringing the matter to the House of Representatives for discussion and approval.