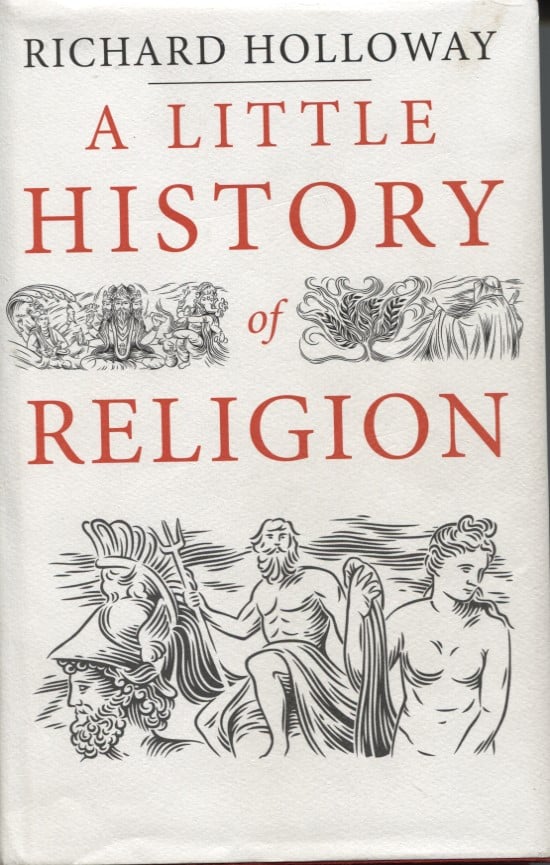 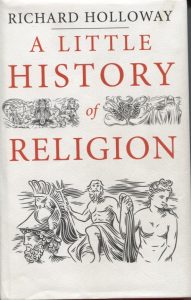 What is religion? And where does it come from? Religion comes from the mind of the human animal, so it comes from us.

An opening like this might be expected to herald an attack on orthodox religion.  On the contrary, Richard Holloway – formerly Primus (senior bishop) of the Episcopal Church of Scotland – presents a sympathetic, non-judgemental description of the world’s major (and many minor) religions.  His approach is summed up in his opening chapter:

Sceptics wonder whether some of these prophets even existed.  And they doubt the claims made in their visions and voices.  Fair enough, but that is to miss the point.  What is beyond dispute is that they exist in the stories told about them, stories that still carry meaning for billions of people today.

Holloway starts his review  of religions in an approximate chronological order with Hinduism, with its belief in reincarnation, and its offshoots, the Buddhists and the Jains.  He then reviews the Old Testament, the foundation of Judaism, Christianity and Islam, from Abraham to Job.  His retelling of the old stories contains insights into their significance to the Jews at the time of writing.

He then covers Zoroastrianism and its offshoot in the Indian Parsees.  Holloway suggests some aspects of Persian Zoroastrianism influenced Judaism during the captivity in Babylon.  The next group covered are what he calls the pragmatic Chinese religions, Confucianism and Taoism.  These are really philosophies for living, with little supernatural content.  Then follows brief surveys of Japanese Shinto, and Greek religion and its Roman derivatives.

Holloway gives a good overview of Islam, and of the Sikh religion, founded by Guru Nanak in an attempt to meld elements of Islam and Hinduism.  But probably of greatest interest to us is his coverage of Christianity.

His approach to Christianity is unusual in that he starts by discussing Paul, and his relationship with the other Apostles. As he points out, Paul’s interest in Jesus is mainly centred on actions after his death, rather than during his life.  Paul must get the credit, however, for insisting that Christianity was not a Jewish sect, but belonged to the whole world.

When Holloway finally discusses Jesus, he includes the caveat: “I don’t want to get into arguments about how or where he was born and how exactly he rose from the dead. . . I want to stick to the most generally accepted facts about him.  They are compelling enough.”  His discussion of Jesus’s life, therefore, focuses on his teaching on relationships between people, rather than with the supernatural.

Holloway discusses the history of the Church through its adoption by Constantine, its development as a monolithic power, to the Reformation. He contrasts Henry VIII’s reformation, in which the authority of the Pope was refuted, but the structure of the Church left largely intact, with the more radical reformation under Knox in Scotland.

In his coverage of American religion, Holloway covers African-American Christianity, the Church of Jesus Christ of the Latter Day Saints, and the various Adventist sects.  He then describes the Church of Scientology and the Unification Church (“the Moonies”), attempting to remain non-judgemental – as far as possible.

He ends his book with a chapter on ecumenism, both within the Christian Churches and in movements such as Baha’i, a chapter on the anger which has arisen within fundamentalist faiths against changes in the modern world, some thoughts on holy wars, and the future for secular humanism and the possible end of religion.

Within his book Holloway has one chapter devoted to Quakers, in which he describes George Fox as “one of the most attractive figures in the history of religion.”  The chapter is mainly devoted to the Quakers’ part in the abolition of slavery, particularly in America. He says:

And they knew by the light that guided them that slavery was just plain wrong.  If all people were of equal value then it was wrong to treat some of them as less than human, as property rather than children of God. And if the Bible said otherwise then the Bible was wrong!

With attitudes like this, Holloway points out, Quakers promoted a more intelligent way of reading the Bible, which eventually led to the historical-critical study of scripture.

He sums up his chapter with:

The Society of Friends may be one of the smallest denominations in the world but its influence is enormous.  It remains Christianity’s conscience.

If you are a student of the world’s religions and need to know the more arcane theological specifics, this book may not be for you.  It is, however, an ideal book to introduce a young person to the world of religion, guided, as it were, by a kindly uncle.