A Quaker Inside View of the Brisbane Disrupt Land Forces Campaign 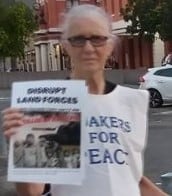 The Disrupt Land Forces (DLF) Campaign swung into action early October 2020 in response to the announcement that the Land Forces Exposition (LFE), postponed in June 2020 due to CoVid, would now be held at the Brisbane Convention Centre 1-3 June 2021. Land Forces is a biennial international industry event to showcase equipment, technology and services for the armies of Australia and the Indo-Asia-Pacific: in essence an Arms Trade Fair. The DLF campaign began as a single entity (Quaker led) and later morphed into multiple satellite groups acting under the guidance of Wage Peace.  This report focusses on the Quaker-led dimensions of the campaign.

The QRM Peace & Social Justice Group, at the prompting of various Brisbane peace groups and urged on by its own deep commitment to the Quaker Peace Testimony, accepted a leadership role in bringing various peace groups and activists together to mount a collective action.   The challenge was to work out how we might not only oppose this specific event, but highlight what it signified and promoted, namely rising militarisation in Australia and the manufacturing of wars for profit.  A letter of introduction and invitation went out to, what we considered, interested parties. Of the 37 identified, 19 responded. Predictably numbers dwindled as time went on, though many reappeared at events on the ground, down the track. We met online every 3 weeks for 6 months and then fortnightly for a further 2 months for 1.5 hours. Time was spent brainstorming how to gain momentum, fulfill our aims and objectives, reporting back on actions done between meetings, refining them and deciding on new ones. We also acted as a clearing house for information and campaign updates for various representative and interested agencies (e.g. Just Peace, WILPF, Friends of the Earth). 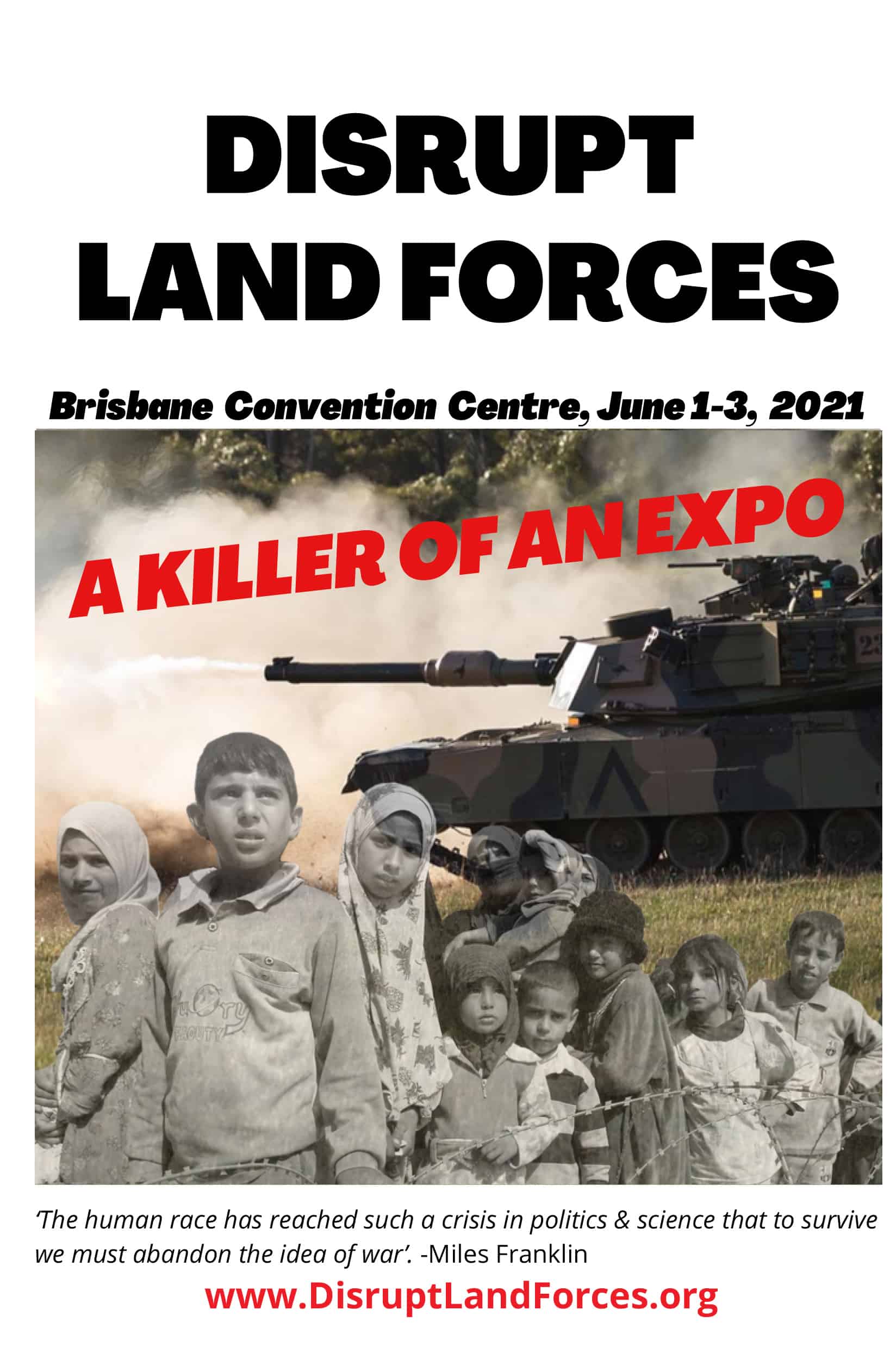 Two major aims of this arm of the campaign were to raise public awareness of LFE and expose the Brisbane based companies engaged in weapons designing, engineering and/or manufacturing and exporting.  Within that cohort, we zeroed in on those companies who were sponsoring and presenting at the expo, in receipt of significant grants from both levels of the Australian government and had partnerships and dealings with highly lucrative overseas defence industries and governments. An initial key strategy therefore, was the production of an information handout. Over the months up to 5000 pamphlets were printed and distributed and Quakers, in particular, took to the city streets, selected train stations and weekend markets with impressive regularity and passion! Unsurprisingly, the vast majority of people knew nothing about it. In the lead-up months, a Quaker presence – albeit at times very small – was brought to every nonviolent direct action conducted at selected suburban weapons manufacturing sites. That presence strengthened during the final crucial Resistance Week of the campaign.

A limitation for the group as a whole was our unfamiliarity and general lack of confidence in and usage of social media platforms and its accompanying technological requirements.  From the beginning we were regularly encouraged to post and refer to Facebook and relevant websites and in the latter months, urged to join Signal and Telegram Apps to simultaneously receive important ‘in the moment news, updates and directives’.

When I reflected on how I came to be a Quaker, I kept going back and back, following the strands of influences in my life, to my earliest memories of childhood. So I think, in order to answer the question, I’ll have to start...

Many of us did not!  As a result, it was very difficult to keep everyone in the group informed and engaged, as the ground shifted too quickly from day to day and from action to action.  Some had a sense of being left out or certainly left behind and try as we might to keep everyone on the same page, through emails and texts, we couldn’t and gave up trying as it was too time consuming and ineffective. In our defence, we drew people’s attention to the Wage Peace, Disrupt Land Forces, and Make West Papua Safe websites and Facebook Pages for information, live-streaming and photos and acknowledge the power and potency of these platforms to garner wider attention and support and the necessity for some of us, at least, to become more proficient.  We invite the reader to visit these sites to learn more.

The conducting of a public meeting on 1st May launched the campaign into its second phase.

It was hugely successful and attracted many new people to the campaign. It also marked the coalescing of the various satellite groups, many unbeknown to us and of a much younger generation. They had been meeting regularly with Margie Pestorious from Wage Peace and planning ‘secret disruptive business’. The gathering was held at Jagera Hall, Musgrave Park, West End – a First Nations stronghold located in a Greens’ electorate. The hall went on to serve as the campaign’s base-camp over the crucial “Resistance Week” 28 May – 3 June. It was literally 2 minutes away from the Convention Centre, with a functioning kitchen to provide meals, hold workshops, a space to debrief, and store dozens of banners and placards.  Quaker funds received from the YM Peace & Social Justice Fund paid for the hiring of the hall in both instances.

The initial, loose collective had one more meeting after the public event, after which members proceeded to plan and stage actions under their separate banners, either in support of, or in conjunction with what had now become a full-scale state and interstate Disrupt Land Forces Campaign. Due to its mushrooming, both in terms of numbers and actions it was impossible to keep abreast of everything that was happening.  In fact, it was a deliberate strategic decision for certain individuals and groups to remain anonymous for fear of compromising actions that were planned for the final 6 days. In particular those to be conducted on the “inside”. Consequently, everyone involved was invited to form or seek out an affinity group with whom they could feel safe and comfortable belonging to, acting with or alongside. 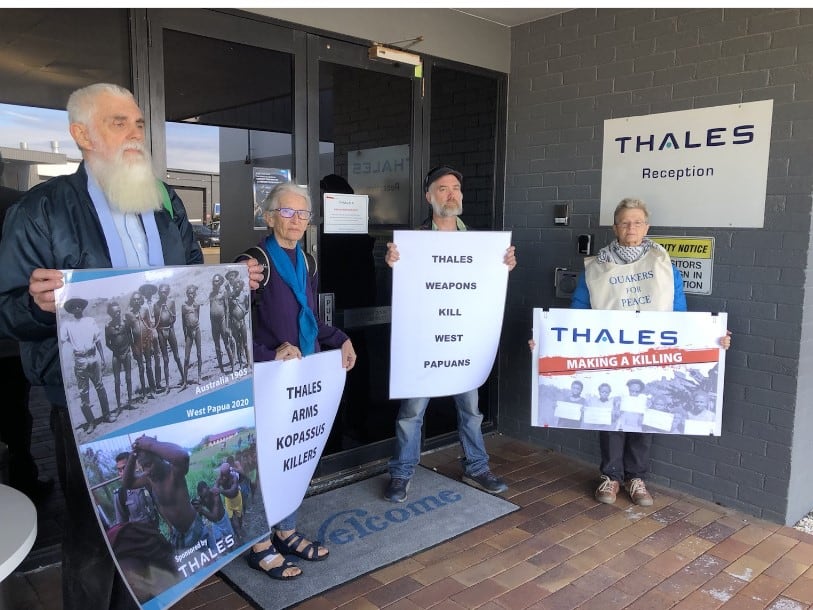 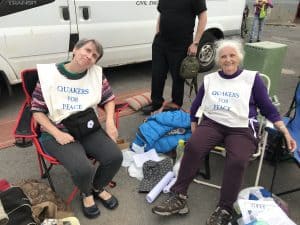 A Quaker Affinity Group of eight naturally formed, which now included an interstate and a regional Friend who had so much to offer.  We held zoom meetings every week during the countdown month, to prayerfully discern what our individual and collective contributions and nonviolent direct actions might be, immediately prior to and during, the 3-day expo.

In true Quaker fashion many were quiet and unseen. The more public ones included

These actions attracted the participation of a number of non-Quakers who resonated with our Peace Testimony and the way we conducted our peace business! 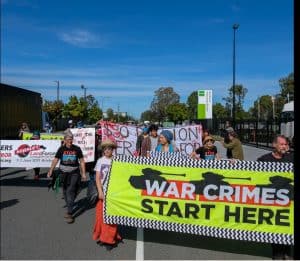 As Quakers we were in the unique position of being able to move between and engage with, almost everyone who held a stake in disrupting Land Forces: from those who found nonviolent direct action too challenging all the way to those who thought it possibly wasn’t enough.  Our understanding and history of nonviolent peace witnessing and civil disobedience rooted in the act of holy obedience, enabled us to balance that tension, stand alongside others and be there when the police moved in to roughly quell some protestors and make arrests.  The chief architects Wage Peace and Make West Papua Safe found our support and physical presence on the ground strategically invaluable as well as emotionally grounding, as we sought to hold the action space in the Light and bear peaceful witness and have conversations with attendant police, employees and fellow protestors.  Our strength too, lay in the combined and comprehensive skill set amongst the Quaker members of the group. We were thus able to fill the array of necessary roles to make the group run its course consistently, competently and confidently, take up where others left off, and provide a source of financial means to help cover campaign costs such as printing and laminating, large banner productions, art and craft materials and food supplies.  What funding and individual donations were remaining we gave to help cover the impending court costs of those arrested e.g. travel and non-pro-bono legal work.

QRM Peace & Social Justice group thanks wider Friends for their acts of support in the form of providing morning and afternoon teas, cooked meals and fruit during our 6 Day Festival of Resistance, monetary donations throughout, distributing the information handout within their circles of influence and holding us and the campaign in the Light for 8 months.

The Expo officially finished 3 June 2021, but the campaign is still being played out in many ways.  Chief amongst them being the court hearings of those who placed themselves wittingly or unwittingly in the path of arrest, during the final days of the campaign, and offering them as much information and support as possible to negotiate what can be a stressful, confusing and convoluted process. Also where possible, emotionally supporting those individuals who bore the brunt of or witnessed police violence, or were the subject of intimidating Watch-house processes.

I was fortunate enough to walk beside Margie Pestorious for most of the 8-month long campaign, as a support person, a companion. She is a seasoned nonviolent peace activist and one of the Peace Pilgrims that ventured onto Pine Gap and faced arrest.  It was an intense time of listening, learning, brainstorming, debriefing, scoping out weapons manufacturing sites together, late night meals and conversations, building trust, offering encouragement and ideas.  She became my mentor, pushed my boundaries and deepened my understanding and appreciation of nonviolent direct action. Margie was the crucial connecting bridge who brought all the activist groups, the generations, the different ideological positions, the cultural communities together in one bonding and single focus. Through that process we, as Quakers became more visible to, and acquainted with a whole range of individuals and groups that we otherwise wouldn’t have, but the reverse was also true.  It was said that the effectiveness of the campaign wouldn’t have happened to the degree that it did, if we as a Meeting and as individual Quakers had not heard the call, embraced the concern, followed the leadings. We give humble thanks!

The work goes on; it does not end here and it behoves us as Quakers to continue to discern for ourselves and as a Society where and how we will place ourselves in this work for Peace, for whom, and especially with whom.  I believe above all it must be with First Nations people and the younger generations.  We encourage Friends to become involved whether by prayer, background work or actual public witness, and to seek to draw from people the spiritual energy of the Beatitudes:  Blessed are they who hunger and thirst after righteousness ... Blessed are the peace-makers… for this is vitally needed in the world we face together. We do not do this work of ourselves, by ourselves, but through us, God can and does weave small miracles.